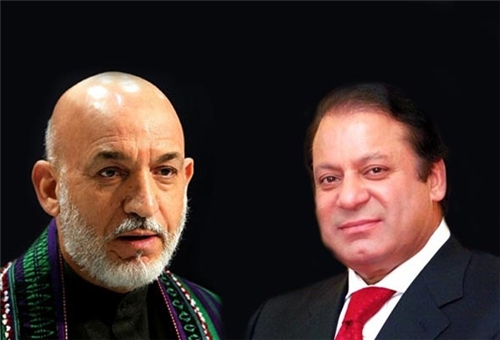 During their meeting at the Prime Minister’s House, the two leaders discussed issues of common interest, including strengthening bilateral ties and the evolving situation in the region.

They also exchanged views on the common challenges facing their countries and expressed their resolve to help each other in times of need. The one-on-one meeting was followed by delegation-level talks, Pajhwok Afghan News reported.

Karzai arrived in Islamabad earlier in the day for wide-ranging talks with Sharif. They are to talk on security and reconciliation issues, as well as Islamabad’s role in the fight against terrorism.

He was accorded a warm welcome at the airport by Prime Minister’s Special Advisor on National Security and Foreign Affairs Sartaj Aziz, Afghan Ambassador Omar Daudzai and other high-ranking government officials.

A spokesman for the Afghan embassy, Zardasht Shams told Pajhwok Afghan News that Karzai would lay the foundation stone of a new building for Afghanistan’s new embassy in this capital city. The new premises are being built of an eight-acre piece of land, according to the spokesman.

During his daylong trip at the invitation of Sharif, Karzai would also meet President Asif Ali Zardari before returning to Kabul in the evening, Shams added. At the end of the meetings, the two sides are expected to issue a joint statement.

The Presidential Palace in Kabul said Karzai, during his first visit to Islamabad in 18 months, would discuss with the host leadership a joint campaign against extremism, Islamabad’s honest role in promoting the Afghan-led reconciliation process and greater trade links.

Last week, the peace body called for the release of the most senior Taliban figure detained in Pakistan, Abdul Ghani Baradar, and others to facilitate a substantive intra-Afghan dialogue. Since November 2012, Islamabad has freed 26 Taliban prisoners, including the former justice minister Nooruddin Turabi.

Over the past 11 years, Karzai has paid 19 visits to the neighboring country, which Afghan officials often accuse of aiding the Taliban. Islamabad, however, denies the charge.

Mohammad Ismail Qasimyar, the HPC advisor on international affairs, says Rabbani will seek Islamabad’s assistance in arranging an international conference of religious scholars in Kabul on ending the war. Pakistani ulema will be urged to lend their weight to the initiative.

On the eve of the trip, the Afghan Ambassador Daudzai, who also intends to run for the presidency in next year’s election, told a Pakistani newspaper Karzai would seek Pakistan’s support for arranging direct talks between Kabul and the Taliban.