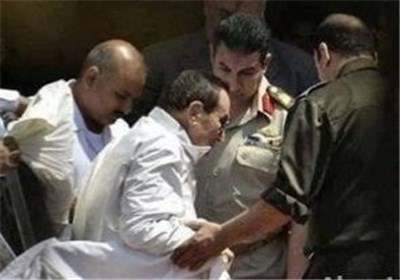 The deposed Egyptian president was escorted by medical and security personnel on Sunday into an ambulance to be taken by helicopter from Maadi Military Hospital to the Cairo Police Academy where he faces judges again.

Al Jazeera’s Wayne Hay, reporting from outside the academy, said Mubarak’s initial appearance was likely to be procedural.

The defence team demanded the testimony of Abdel-Fattah el-Sisi, current defence minister and head of the armed force, because he was the director of military intelligence during Mubarak’s rule.

The court session was adjourned for recess.

Mubarak, 85, was found guilty and sentenced to life in prison last year for complicity in the killing of about 900 protesters during the 18-day revolt against him in 2011.

He is being retried after his successful appeal against the previous conviction.