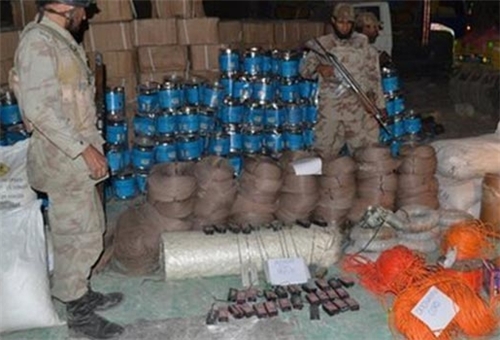 TEHRAN (FNA)- Pakistani paramilitary forces on Sunday raided a house in the Northwestern tribal belt on the Afghan border and seized up to 500 kilograms (1,100 pounds) of bomb-making material, an official said.

The raid was carried out in Shahkas village in Khyber district close to Peshawar, the capital of Khyber Pakhtunkhwa province where forces are bogged down fighting militants.

A suspect was arrested during the raid, which was carried out after a roadside bomb wounded three civilians in the area on Saturday, he said. “The site was being used to make bombs for terrorist activities in the cities of Peshawar, Islamabad and Lahore,” Sarwar said.

Authorities last week said they had raided a car bomb factory in the Southwestern city of Quetta, confiscating more than 100 tons of chemicals which had been used in recent attacks.