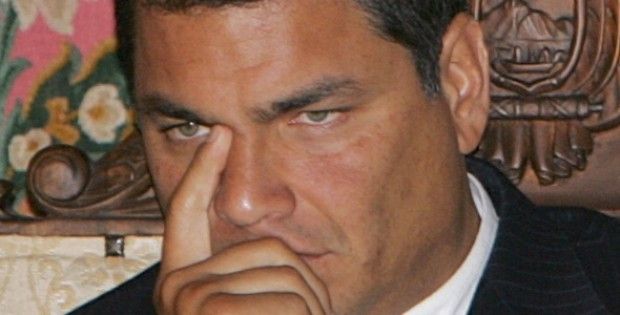 Ecuador’s President Rafael Correa has slammed Washington’s imperialistic policy of interference in other countries’ internal affairs, including the US-, and UK-engineered 1953 coup in Iran, Press TV reports.

“It is clear that there were tremendously disastrous policies. There have been colonization, imperialism and intervention. Look at all data that the CIA is publishing, the last one. It said CIA participated in a coup. Where was it? Iran. They put the Shah in power, a completely corrupt regime. It’s real,” said Correa on Wednesday, speaking to a group of international TV networks, including Iran’s Spanish language channel Hispan TV.

On August 15, 1953, the British and US intelligence agencies initiated a coup through the Iranian military, setting off a chain of events including riots in the streets of the Iranian capital, Tehran, that led to the overthrow and arrest of Iran’s democratically-elected Prime Minister Mohammad Mosaddeq four days later.

On Monday, the CIA for the first time published a document that confirmed Washington’s role in the 1953 coup d’état.

Correa also condemned the US spying activities in Latin America.

“All our emails have been hacked. Our telephones have been tapped. Our source who took part in these operations told us about it. But even our source didn’t know about where the espionage has been conducted from. That is an espionage case different from [the one revealed by US whistleblower Edward] Snowden,” Correa said.

“It spied on [Colombian President Manuel] Santos’ government, the Ecuadorian, Venezuelan and Argentine governments and we have evidence for that. There is no doubt about it,” he added.

Documents leaked by Snowden reveal that the program targeted most Latin American countries and collected massive amounts of data on a wide range of developments in the region.