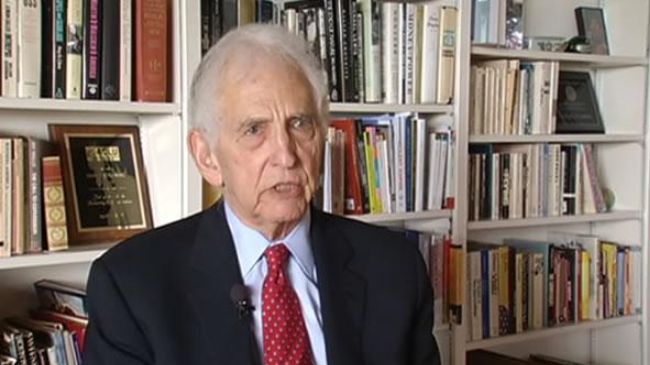 US becoming a ‘police state’

Pentagon Papers whistleblower Daniel Ellsberg says the revelations about the US government spying programs, the pursuit of the leaker of such programs, and the recent sentencing of US Army Private Bradley Manning show that the US is becoming “a police state.”

“We have not only the capability of a police state, but certain beginnings of it right now,” Ellsberg, former US military analyst who revealed classified Pentagon documents on the Vietnam War, told the Huffington Post.

Ellsberg referred to the recent revelations about massive US spying programs made by American leaker Edward Snowden as one instance of such “certain beginnings.”

“And I absolutely agree with Edward Snowden. It’s worth a person’s life, prospect of assassination, or life in prison or life in exile – It’s worth that to try to restore our liberties and make this a democratic country,” said Ellsberg.

A 2011 Foreign Intelligence Surveillance Court opinion, declassified on Wednesday, has shown that the US National Security Agency unlawfully collected tens of thousands of Americans’ emails and other electronic communications.

The Wall Street Journal reported on Tuesday that the NSA has also built a surveillance network that covers roughly 75 percent of all US Internet traffic.

Referring to the recent sentencing of former military intelligence analyst Bradley Manning, Ellsberg said that the case is another instance of the beginning of “a police state” in the US.

A US military judge sentenced Manning to 35 years in prison on Wednesday for handing a trove of secret government documents to anti-secrecy website WikiLeaks.

Just hours after Manning was sentenced, his lawyer, David Coombs, revealed that military prosecutors had offered his client a plea deal part of which “would be to cooperate in testifying.”

Although Coombs did not explicitly say prosecutors sought testimony against WikiLeaks founder Julian Assange, analysts believe they would have had little else to ask for.