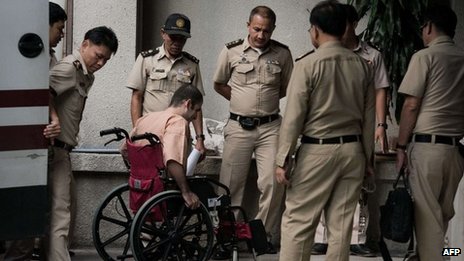 A court in Thailand has jailed two Iranian men for their roles in an attempted bomb plot in the capital, Bangkok, in February 2012.

The two men said they were innocent, but the court found them guilty of charges that included illegal possession of explosives.

The men were detained after a huge explosion accidentally damaged the house they were staying at.

One man had his legs blown off after he tried to throw a bomb at police.

The two were among six suspected of involvement in the bomb plot after the accidental blasts in the Ekamai area in central Bangkok.

The two defendants were part of what Thai officials believe was a team sent to Thailand to target Israeli diplomats in Bangkok.

The blasts came a day after two bomb attacks targeted Israeli diplomats in India and Georgia.

Israel has accused Iran of orchestrating the attacks, a charge which Iran denies.

Another suspect was arrested in Malaysia and is fighting extradition to Thailand.

Saeid Moradi, 29, who lost his legs in one of the explosions, was given a life term for charges that included attempted murder.

He was also found guilty of carrying and using explosives which caused the destruction of property, the court said.

Moradi said he was carrying the explosives to dispose of them.

Mohammad Khazaei, 43, who was detained at the airport in Bangkok, was given 15 years for possession of explosives.

He said he was not a militant and only met Moradi at an airport in Tehran, Iran.

The lawyer of the two men said he would consult with their families to work out whether they would appeal against the court’s decision.