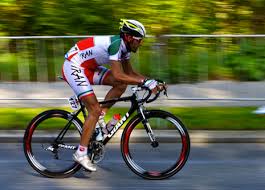 PENAMPANG, Aug 22 (Bernama) — Tabriz Petrochemical Team riders stole the limelight when they lifted five titles at the close of the Tour of Borneo (TOB) 2013 here, Thursday.

The Iran-based team, who are making their debut in the Tour of Borneo, were declared the winners of the team general classification and the best Asian team after accumulating 52 hours, 43 minutes and 43 seconds throughout the five-stage race.

The continental team’s victory was much sweeter when their rider, Ghader Mizbani Iranagh maintained the main jersey.

Ghader emerged as the general classification winner (yellow jersey) when he accumulated 17 hour, 31 minutes and nine seconds at the end of the race, ahead of his nearest rival and team-mate Mirsamad Pourseyedigolakhour by merely eight seconds.

“The race was good and hopefully they (race organiser) will be making it much better next year,” said Ghader.

He noted that the gruelling climb at the Crocker Range was an interesting challenge in the race.

“It was not a problem for a UCI 2.2 race. Even for a similar category race in Europe, we had to encounter a category one climb,” added Ghader.

Besides that, team rider Mehdi Sohrabi clinched his second stage win when he won the final stage from Kundasang to here, the shortest route of this year’s edition with a distance of 98.1km, by clocking 2:14:48s.

The Iranian team almost made a clean sweep when their attempt to seize the green jersey was unfulfilled when Mehdi missed the sprint point chase with just one point from Malaysian rider Anuar Manan.

Anuar, who represented Azerbaijan-based Synergy Baku Cycling Team, claimed the green jersey with 44 points, while Mehdi, who powered himself to win the final stage settled in second position with 43 points.

“Today’s stage is not as tiring as yesterday’s stage. My initial target today was to get to the podium but was unsuccessful.

“The race began with a climb at the zero km and I have to go through a more hilly route after that. When we enter the downhill stretch, the speed was faster and I lagged behind because there were riders who did break away,” said Anuar.

Because of that, he was unable to be in front of the leader at the sole sprint zone at Kampung Berungis.

“If I can claim the valuable point at the intermediate sprint, I might be in a comfortable situation winning the green jersey. Overall, I am happy with the green jersey despite not being in top condition and recovering from an injury,” he said.