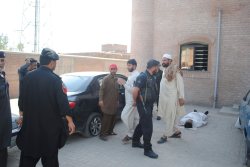 One killed, four injured in firing at a polling station in Pakistan

Islamabad, Aug 22, IRNA – One person was killed while four others sustained injuries in a firing incident during polling in southern Sindh province on Thursday, local media reported.

The incident occurred at Dulyar polling station in Sanghar. Polling has been stopped due to this incident. The person killed was a member of Pakistan Muslim League- Functional.

Meanwhile women voters have been stopped from excercising their right of vote in the by-election in different constituencies of Punjab and Khyber Pakhtunkhwa.

According to reports, the areas where female voters have been stopped include Zindgi Khel, Khairo Khail, Pahar Khel, Kot Kashmir, Bakhmal Ahmed Zai and Nawar Khel in National Assembly Constituency NA-27 in Lakki Marwat and Nowshera in Khyber Pakhtunkhwa and district Mianwali in Punjab.

The ban was imposed by tribal jirgas comprising local elders.

The Election Commission spokesman said that stopping women from casting vote was a crime and the electoral body would count votes of women and men separately.

Supporters of PML-N, the ruling party in center and Punjab, and Imran Khan’s PTI, which rules Khyber Pakhtunkhwa, clashed during by-polls in Punjab’s Mianwali area. Two people were injured in the clash.

Polling in by-elections on 41 National and Provincial Assemblies seats is in progress across the country, with over 500 candidates in the fray.

The polling began at 08-00 in the morning and will continue till 05.00 in the evening without any break.

The seats include 15 of the National Assembly and 26 provincial assemblies for which around 8.5 million voters will cast their votes.