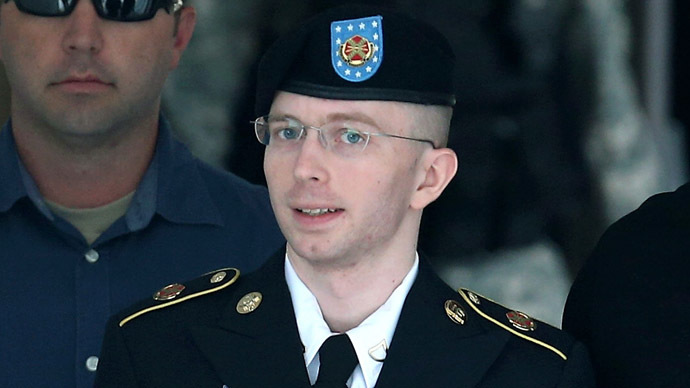 Wikileaks’ Bradley Manning to be sentenced

FORT MEADE, Maryland — US Army Private Bradley Manning will be sentenced Wednesday for handing a mass of data to WikiLeaks in the biggest breach of official secrets in American history.

The 25-year-old soldier was convicted of espionage and other crimes last month, having admitted being the source of hundreds of thousands of war reports from Afghanistan and Iraq and confidential US diplomatic cables.

His sentencing, due at 10 am (1400 GMT), is considered especially important as another leaker — the former intelligence contractor Edward Snowden, currently in Russia — is wanted in the United States on espionage charges, having disclosed details of the National Security Agency’s secret electronic monitoring operations.

Military prosecutors on Monday pressed for a 60-year prison term for Manning, arguing that the penalty would send a message to people contemplating the theft of classified information.

Lead defense attorney David Coombs, however, appealed for leniency for his client. He said Manning had expressed remorse, cooperated with the court and deserved a chance to have a family and one day walk free.

Manning was a junior intelligence analyst at a US base near Baghdad when he handed over the data — about 700,000 reports and diplomatic cables — to WikiLeaks, the anti-secrecy website headed by Julian Assange.

Manning was arrested in Iraq in 2010 and has been in military custody since. The documents that he disclosed rankled American allies when WikiLeaks published them, prompting warnings from US officials that troops and intelligence sources had been jeopardized.

The most notorious breach was a video and audio file, dubbed “Collateral Murder” by WikiLeaks, showing graphic cockpit footage of two US Apache attack helicopters opening fire and killing 12 people in Baghdad in 2007.

Manning, a hero to supporters who regard him as a whistleblower who lifted the lid on America’s foreign policy, was found guilty of 20 of the 22 charges leveled against him.

He was, however, cleared of the most serious charge — “aiding the enemy,” chiefly Al-Qaeda. More than 100,000 people have signed a petition calling for Manning’s nomination for a Nobel Peace Prize.

Underlining the seriousness of the case, the US government painted him as a reckless traitor whose actions put his country at danger.

Expert witnesses testified during the sentencing phase of Manning’s trial that the soldier was confused about his gender and sexuality and under enormous psychological stress at the time he committed the leaks.

“I want to go forward. I understand I must pay the price,” Manning said.

Judge Lind has said that Manning will have 1,293 days removed from his eventual sentence, given his time in custody so far plus credit for a period spent in harsh conditions at the US Marines Corps brig at Quantico, Virginia.