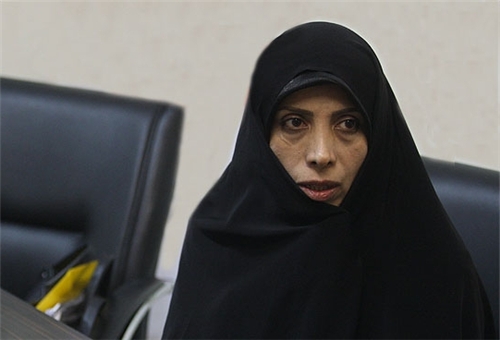 ‘Special circumstances’ Behind dearth of women In Iran’s cabinet

Iran’s new president apparently has an answer for those who have criticized the lack of women in his cabinet: They aren’t up to the task.

Speaking at the Interior Ministry in Tehran on August 19, President Hassan Rohani provided some insight into what prevented him from nominating or appointing women to top posts in his government.

“In many professions, our women are educated and ready to accept responsibility,” Rohani was quoted as saying by Iran’s semiofficial ISNA news agency. “During government meetings, I emphasized to my ministers to try to make use of the [talent] of women and youths. At the ministerial level, because of our country’s special circumstances, it did not happen.”

The assumption among Iran observers is that by “special circumstances,” Rohani was referring to the plethora of difficult issues the country faces, including biting international sanctions and a deteriorating economy. His comments are being interpreted to mean that he believes women are incapable of tackling such weighty problems.

The president, a relative moderate who tried to curry the favor of reformist-minded voters during his campaign, was quick to leave an opening for the future, however.

“If we want domestic security, we must give everyone equal opportunity,” he said. “Women, too, must have the same opportunity as men. Educated and experienced women must gain higher social opportunities step-by-step.”

Rohani added that women did not need any favors because their involvement in government was a “natural and legal right.”

Not A Single Woman

When Rohani announced his proposed cabinet list during his inauguration ceremony on August 4, he raised many eyebrows. Although he had repeatedly pledged to promote women’s rights and advance equality for women in society, he failed to nominate a single woman.

Amid criticism over his all-male cabinet, he eventually added one woman to a presidentially appointed position by naming Elham Aminzadeh his vice president for legal affairs.

In making the appointment by decree on August 11, he cited Aminzadeh’s “scientific competence and judicial qualifications, as well as legislative experience and moral merits.”
But that move failed to end criticism he has received from women’s rights advocates at home and abroad. One commentary published by the Tehran-based “E’termad Online” on August 15 lamented that in the first few days of parliamentary discussions over Rohani’s proposed cabinet, no women lawmakers had asked to speak.

The commentary bluntly asked: “Have the women MPs not been allowed to express their views, or did they not see any need to state their views?”

Rohani’s cabinet is male dominated even in comparison with that of his predecessor, Mahmud Ahmadinejad. At the start of his second term, Ahmadinejad nominated three women to serve as ministers. One, Marzieh Vahid Dastjerdi, was approved by parliament and in heading the Health Ministry became the country’s first woman minister.

Mohammad Khatami, president from 1997-2005, brought the first woman into a top government post in 1997, when he named Massoumeh Ebtekar to a vice presidential post.