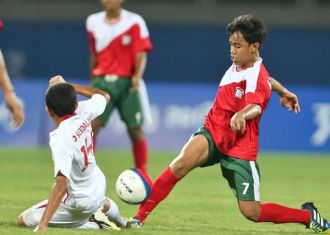 The Iran U-14 football team edged Iraq 1-0 on Wednesday to advance to the final match of the Asian Youth Games (AYG) on Wednesday.

The final match will be held on Friday at Nanjing’s Jiangning Sports Center.

Iran’s Shahab Rashno scored the lone goal of the game in the 24th minute.

In the final, Iran will play the winner of the other semifinal game, which pits North Korea against South Korea on Thursday.

The 2nd Asian Youth Games opened on August 16 in Nanjing, China and runs until August 24.

Just like the inaugural edition, the games will serve as a dress rehearsal for the upcoming 2014 Summer Youth Olympics, which will also be held in the same city.