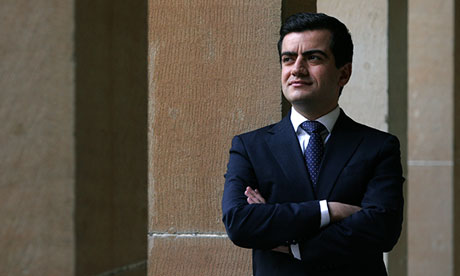 Australia to have first Iranian-born Senator in federal politics

Dastyari enters federal arena as a migrant justifying asylum politics and a NSW Labor graduate out to undermine factions.

He is the Middle Eastern migrant forced to advocate a hardline asylum-seeker policy and an anti-faction warrior who headed the most ruthless part of Labor’s party machine.

Sam Dastyari’s inner conflicts are about to be taken on to a public platform when he follows in the footsteps of Mark Arbib and Matt Thistlethwaite – two of his three immediate predecessors as NSW Labor general secretary – to assume a seat in the Senate.

Much has been written of his justification for the move – his declared wish to focus on policy – but Dastyari says he is aiming higher. He wants to reshape the entire political debate, stop “old white men” seeing power as their default position and have a serious discussion about a “bigAustralia” – even if that means higher taxes in the name of big government.

“Here’s my theory,” he tells Guardian Australia over lunch in Melbourne half a block from Labor’s campaign headquarters. “I think there is something fundamentally wrong in the way we conduct the debate in the Australian left, there’s something fundamentally wrong in the heart of Australia in that we’re healthier, we’re wealthier, we’re living for longer, every socioeconomic indicator [shows] things are getting better, but everybody is under this incredible amount of pressure, time pressure, social pressure and financial pressure.

“What we need to do is build the next narrative for the Australian centre left – it has to be about quality of life and standard of living. We can’t let ourselves get caught in this endless cost-of-living debate with the conservatives – we’ll never win that.

“The cost of living is part of this whole quality of life and standard of living, but it’s not the whole thing. If we start talking about environmentalism, trade unionism, within this prism of quality of life, I think that’s the future debate for us and I think we can win.”

Where Labor cannot let itself get captured, he says, “is in this very, very narrow debate” set out by the Coalition. “On a policy level what that means is being out there and being prepared to say ‘yeah, there are going to be extra taxes and fees and charges to pay for social policy but this is what it’s going to mean’ and being able to frame that kind of debate.”

Dastyari, 30, is based in Melbourne for the election campaign while his wife Helen, just weeks away from giving birth to their second child, stays at home in Sydney. Seen as a Labor wonderkid, he stacked his first branch as a teenager and was hauled into the Sussex Street headquarters by local Labor chiefs while still in his school uniform.

He took up the secretaryship of NSW Labor at 26, a year before the party’s crushing state election defeat at the hands of Barry O’Farrell in 2011. Dastyari concedes he was not prepared for the magnitude of the loss or the revelations that would come to light when former Labor partypowerbroker Eddie Obeid was investigated by the Independent Commission Against Corruption (Icac).

When asked about Obeid he asks for more time to consider his answer and a few days later sends a statement saying he had always dealt with Obeid “constructively” along with many others and was shocked by the dealings identified by the Icac. “In all my dealings with him he was professional, charming and thoughtful,” the statement said.

Dastyari was born in Iran. In the 1980s, when he was five, he came to Australia, where his uncle had settled, on a now-defunct family reunion scheme.

On asylum-seeker policy he says he is “torn between empathy for people who are making a journey not that dissimilar to mine” and a clear unwillingness to criticise Kevin Rudd’s so-called “Papua New Guinea solution”. He instead bemoans the “horrible” and “awful” tenor of the debate.

“We have to be careful. I think we got it right on PNG but you’ve got to be careful that you’re not playing politics in the lowest common denominator. That’s a challenge, it’s really hard, it’s a really hard policy for someone like me because … my personal experience obviously shapes my views on some of this,” he says.

Dastyari says his parents are party members and support the policy – which is intended to ensure all asylum seekers arriving by boat are processed in PNG and other countries and none settle in Australia, even if found to be refugees. But he concedes that his legal academic sisterAzedeh – who is “amazing” and the “smartest person I know” – is a critic of the scheme.

Dastyari sees a bigger storm brewing over asylum-seekers and says Australia refuses to have a debate about its population targets.

“I think the danger is … for a long time there was a consensus on this debate and when that consensus is broken it’s very hard to repair it,” Dastyari says.

“You have to ask yourself generally, not in an emotive debate, but in a cold, hard-headed debate, do you want to be a big country, do we want to be a big Australia? What are the environmental consequences of that? What are the social policy consequences? How do you attract the most talented people? How do you grow a population, and in doing so how do you create a space, a larger space for those who are in need?

“But you have to be able to have the debate in a sensible [way]. Where is the country going to be in 2020, 2050, 2070? It’s very easy to run a politics of fear,” he says, hinting this debate may be brought to the fore in the increasingly unlikely event of a Labor election win.

With a big Australia inevitably comes the question of migration and the nation’s diverse cultural landscape.

In Sydney alone almost every language in the world is spoken, yet many Australians are lucky to find a single representative in federal parliament who shares their skin colour.

Dastyari uses the dominance of “old white men” in parliament as a further argument in favour of the sweeping reforms to the ALP he has been advocating for years, including US-style primaries.

But he does not believe race-based quotas are the answer to the lack of cultural diversity in the party. Ethnic diversity in parliament will naturally follow when candidates are selected by the whole community, he says.

“Australian politics can’t just be about old white men’s careers. There has to be an injection of energy, there has to be an injection of challenging some of the ideas and frankly one thing I’m keen to see is more ethnic voices in our parliament because our parliament’s not really representative of the ethnic diversity,” he says, adding: “I think that’s starting to change.”

Seen in some quarters as the future of the party, Dastyari embodies the internal conflicts of Labor.

He helped dismantle the party machine, only to be parachuted into the Senate. And while the electorate has been talking about the cost of living for years he is preparing to move on to the next debate – one he is convinced he can win.

“I think there’s a bigger role for government in areas like childcare, aged care and other areas, but I think what we have to do is win that debate. Take environmentalism for example, I would have liked to see that debate in Australia more about making sure that my kids are able to experience something like the Great Barrier Reef and what that means about being part of the fabric of being Australian, than necessarily about numbers and signs and graphs and taxes.

“If we can build a debate, build a narrative around this whole quality of life issue I think we will be in a really strong place.”