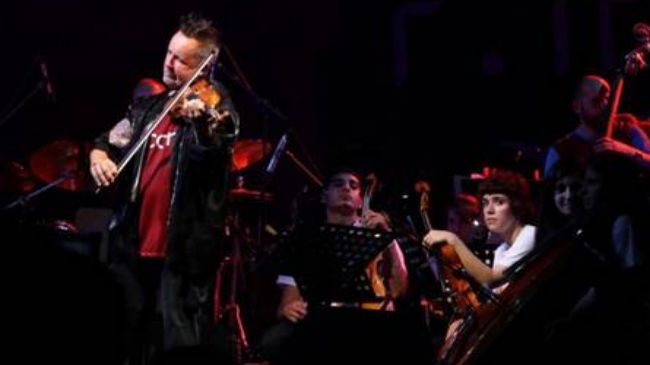 Britain’s Palestine Solidarity Campaign (PSC) has condemned the BBC’s decision to censor a message of support for the Palestinians made during annual classical concerts at the Royal Albert Hall London.

British violinist Nigel Kennedy told a cheering crowd at the end of a joint Proms performance with the Palestine Strings, a Palestinian group from the West Bank and Gaza, on August 8 that the concert showed how “giving equality and getting rid of apartheid gives a beautiful chance for things to happen”.

The BBC has reportedly decided to remove Kennedy’s anti-Israeli statement from a recording of the Prom that is to be broadcast on BBC Four on Friday, August 23.

PSC director Sarah Colborne censured the decision saying the British state broadcaster is meant to be impartial, according to its charter, and censoring Kennedy’s reference to the fact that his co-performers suffer “a system of inequality and apartheid under Israeli occupation” questions that impartiality.

“On what grounds can the BBC justify this censorship – every word Nigel Kennedy said was accurate and well-evidenced. While we understand why the Israeli government is trying to keep the truth from the world, we don’t understand why the BBC thinks it can get away with colluding in this,” she said.

“Suppressing free speech and political dissent is the norm for state broadcasters under dictatorships. What is worrying is when we start to see this kind of suppression being practiced by our own state broadcaster, the BBC,” she added.

Colborne also called on the BBC to review the decision.

Kennedy had told BBC Radio 4 earlier this month that the “problems of Apartheid” are “extreme” in Israel adding “when it was South Africa people did something about it”.

The BBC has apparently made the decision under pressure from the Zionist lobbies and its former governor Baroness Ruth Deech.