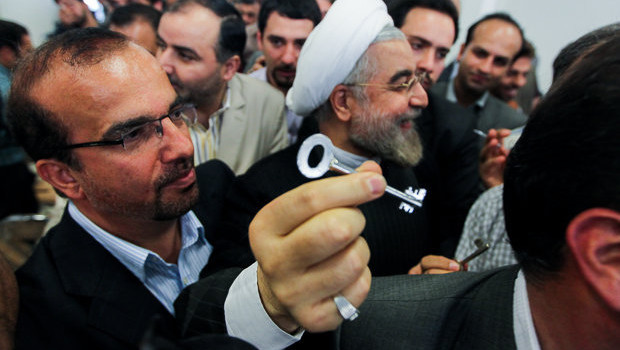 Iran’s new president Hassan Rouhani has been sworn in. His cabinet has been approved. The rest of us are on the edge of our seats waiting to see if Iran and the US will hold meaningful negotiations to address the Iranian nuclear file. But scheduling talks is only the first step, what needs to come next — the willingness to compromise on both sides — will indicate whether a solution to this interminable crisis is possible.

The last round of nuclear negotiations in the spring/summer of 2012 created high expectations as both sides seemed willing to have another go at solving the impasse. At the same time, neither appeared ready to compromise on issues that were of concern to the other. The P5+1 (US, Britain, France, China and Russia plus Germany) sought to address Iran’s ability to sprint towards a nuclear weapon with their “stop, ship and shut” proposal. Tehran was asked to stop producing 20% enriched uranium, export its accumulated stockpile and shut down its underground Fordow uranium enrichment facility all in exchange for minimal sanctions relief: the suspension of measures on gold and precious metals. Needless to say, the Iranians didn’t accept.

While getting all parties to meet and spell out their proposals after a long break in negotiations was a feat in itself, substantively, not much was achieved. Vali Nasr at Johns Hopkins University hit the nail on the head when he said: “The problem is that Iran is stuck in its position: it has to give up substantial things — trump cards — for talks to proceed substantively, and it needs serious concessions in return.” But the P5+1 is not prepared to give them.

Now the context has changed. A new Iranian president has entered the scene and he seems more amenable to meaningful negotiations than his predecessor. This doesn’t mean Rouhani is a reformer. He’s very much a regime insider who had to pass the Guardian Council’s screening process like all presidential candidates do. He’s also a cleric with a long tradition of loyalty to the Islamic Republic who’s served on numerous state bodies and, prior to his election, was Leader Ali Khamenei’s representative to Iran’s Supreme National Security Council. Of course, these are positive attributes for a president inside the Islamic Republic. Former president Mahmoud Ahmadinejad made enemies in almost every government department, whilst Mohammad Khatami’s reformist ways seriously threatened Iran’s hardliners. Both had their hands tied when it came to implementing significant changes.

Rouhani’s track record suggests he knows how to sell policies at home. In October 2003, when he was Iran’s top nuclear negotiator, he agreed to a limited suspension of its enrichment program while telling the Iranians this would buy time to advance it in other ways. This allowed him to silence his hardline critics who were accusing him of selling Iran out.

In addition to willingness and ability, Rouhani will need assurance that he has an international partner who’s interested in cooperation, and a reason to compromise on an issue that has been elevated to national importance in Iran. If faced with inertia or increasing sanctions, Iran’s hardliners will discredit him and force the country back into a policy of resistance. Both sides must be willing to give-and-take and show decisive leadership to reach a deal.

If the P5+1 wants to limit Iran’s enrichment ability, and possibly its future plutonium production, it will have to offer more in return. Iran will want reciprocity in the weight and substance of a deal. This means some form of significant sanctions relief, or, given the difficulties involved in removing sanctions, a timeline to that effect should Iran agree to curb its program. This would go some way in convincing a (perhaps rightfully) paranoid regime that sanctions were not designed for regime change. Given the difficulties the US faces with Congress, this is an area where the EU could play an important role.

The Iranians will also want some form of acceptance of their “right to enrich”. There is of course, no such right. The Nuclear Non-Proliferation Treaty (NPT) explicitly refers to the right to peaceful nuclear technologies, not enrichment. Nevertheless, once again, Iran has elevated its interpretation of the NPT to such importance that it will have to be addressed. It remains to be seen whether Iran will accept enough limits on its enrichment to prove the peacefulness of its program and allow for the recognition of this “right”.

Rouhani’s presidency offers the P5+1 the best chance it has had in a while to reach some form of technical deal addressing the concerns surrounding Iran’s nuclear program. Will Iran’s negotiating partner be able to respond this opportunity?