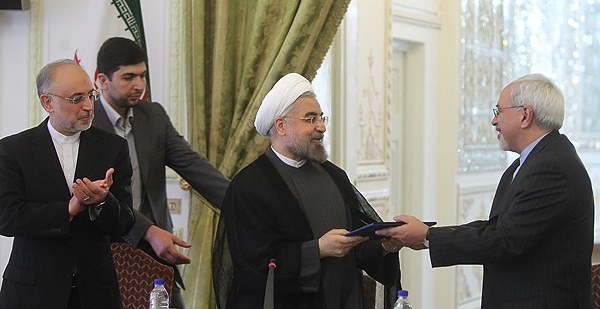 The new Iranian Foreign Minister Mohammad Javad Zarif is taking over the Ministry of Foreign Affairs of the Islamic Republic of Iran from his predecessor, Ali Akbar Salehi, at a time that the entire Middle East and North Africa from Syria to Egypt, from Tunisia to Libya, and also from Bahrain to Iraq and Lebanon, are grappling with various political and security crises.

Iran’s nuclear case has been also relatively stagnant. In the meantime, the radical politicians in the United States as well as pro-Israeli lobbies in the US Congress and Senate are keeping up their loud cries for the intensification of sanctions against the Islamic Republic. On the verge of his official inauguration as the new Iranian foreign minister, in the following interview we have discussed with Mohammad Javad Zarif such important issues as the true meaning of moderation in Iran’s foreign policy, the new administration’s plans for the continuation of the nuclear negotiations, the possibility of transferring management of the nuclear case from the Supreme National Security Council to the Ministry of Foreign Affairs, Iran’s possible positions on radical moves taken by the United States and the pro-Israeli lobby, and the possibility of future direct talks between Tehran and Washington in the light of the existing political equations in the region.

Q: The issue of “moderation” was one of the main mottos of the “Administration of Foresight and Hope.” How do you define moderation in the area of foreign policy?

A: I personally believe that moderation means realism and creation of balance among various needs of a country for the advancement of the foreign policy and pursuit of the foreign policy goals through plausible and rational methods and a suitable discourse. Moderation does not mean to forget about the values or discard the principles. Moderation neither means to fall short of materializing the country’s rights. In other words, as I said in my address to the Majlis (Iranian parliament), moderation has its roots in self-confidence. The people who confide in their own ability, power, possibilities and capacities will tread the path of moderation. But those who are afraid and feel weak mostly go for radicalism. Radicals in the world are cowardly people and although their slogans may be different from one another, there are close and good relations among them. The world of today needs moderation more than anything else and the Islamic Republic of Iran, as a powerful country, can push ahead with a suitable foreign policy approach through moderation.

Q: In his first press conference after the inauguration ceremony, President [Hassan Rouhani] said resumption of the nuclear negotiations with the P5+1 group will be one of his priorities. Do you have any new plan or proposal for the resumption of these talks?

A: There have been discussions inside the administration with Mr. President about how to follow up on the country’s nuclear rights and reduce unjust sanctions which have been imposed against the Islamic Republic of Iran. The basis for our work is to insist on the rights of Iran and do away with logical concerns of the international community. As the Supreme Leader and the President have emphasized, it would be easy to achieve this goal provided that the main goal of all involved parties is to find a solution to the nuclear issue. We believe that finding a solution to the nuclear issue needs political will. On the side of the Islamic Republic of Iran, the election of Dr. Rouhani – in view of his past track records with regard to this case – proves that the Iranian people are willing for the nuclear issue to reach a final solution with power and strength and within a reasonable time frame. We wish the opposite side will also have the necessary political resolve for the resolution of the nuclear issue. In that case, we would have no concern with respect to assuring the world about the peaceful nature of our nuclear energy program because according to the fatwa [religious decree] issued by the Supreme Leader and based on the strategic needs of Iran, nuclear weapons have no place in our national security doctrine and are even detrimental to our national security.

Q: There have been rumors about the possibility of transferring the management of the nuclear case from the Supreme National Security Council to the Ministry of Foreign Affairs. Do you confirm such speculations or deny them and, basically, are there any specific plans for the transfer of this case?

A: I have not heard such a thing. This is a decision for the President to make. At any rate, in view of the experience I have in this regard, I will do my utmost to be of service for the advancement of the nuclear case in any position I am and to any degree possible. However, it is for the highest ranks of the Islamic Establishment to make the final decision about how to pursue the nuclear case, the form and framework of negotiations, and the best methods to be used in this regard.

The main issue is whether the necessary political resolve [among member states of the P5+1 group] will be present and whether the US government is ready to stand in the face of the interest groups and prevent the whole case to be steered by radical groups?

Q: We have witnessed the emergence of anti-Iran currents at both the US Congress and Senate concurrent with the election and inauguration of President Hassan Rouhani’s administration. On the other hand, Israelis claim in their propaganda campaigns that the administration in Iran has changed, but policies are the same as before. What is your plan to offset such radical moves?

A: The warmongering elements are apparently concerned about reduction of problems and are clearly doing their utmost to resort to any pretext in order to intensify the crisis with Iran. The important point is that decision-makers in Europe and the United States should come to grips with the real nature and goals of warmongers. On this basis, they should not allow a warmongering and tension-seeking agenda – which aims to put unjust pressures which have no place in international law on the Iranian nation – to prevent them from taking advantage of opportunities which can be used to find solutions to existing problems. The political agenda of radicalism clearly proves that radicals are cowards and are afraid of negotiations and dialogue. Therefore, such groups make recourse to hasty and ineffective methods in order to bar the progress of moderation. Such cowardly people usually fail to achieve their political goals as well.

Q: Will you agree to engage in bilateral direct talks with the United States if such a thing is proposed to you on the sidelines of such international meetings as the United Nations General Assembly sessions or negotiations with the P5+1 group?

A: The Supreme Leader has made his opinion about [direct] talks [with the United States] public time and time again. Negotiations, per se, is not an issue here, but the main issue is what topics are going to be discussed in such negotiations and how much political determination exists in the opposite side for the settlement of the existing problems. The main issue is will such a political resolve take shape and whether the US administration is actually ready to stand up to radical groups and prevent such radical groups from setting the course of the whole issue? This will be in fact a litmus test for the government of the United States to show its readiness to play a more serious role and pave the way for the achievement of a final solution.

Q: Don’t you think that bilateral talks between Tehran and Washington constitute the secret precondition for the improvement of relations between Iran and Europe?

Q: You are taking charge of the Ministry of Foreign Affairs at a time that the Middle East is going through a hectic period of its history. We are witnessing different crises from Syria to Egypt, and from Bahrain to Lebanon and Iraq. What are your priorities among these regional cases?

A: Conditions in the region have become hectic and inflammatory as a result of shortsightedness of certain political players – most of them coming from outside the region – during the past few years, and we need a collective effort to curb in the crisis. On the one hand, we are faced with fundamentalism while, on the other hand, we see how people’s votes are forgotten and downtrodden. And of course, we can see the clear hands of foreign interventionist powers that foment unrest in the region the result of which is the loss of thousands of innocent lives. Unfortunately, we have been witnessing a severe escalation of domestic conflicts in Egypt during the past few days in which hundreds of innocent people have lost their lives. As a result, it is not only incumbent on us to find a way to put an end to the ongoing crisis in Egypt, but a more serious need of the region and the world is to prevent further spread of radicalism by taking advantage of the indigenous models of democracy. I believe that the Islamic Republic of Iran will be able to play a crucial role in this regard, especially after the political epic that took place during the current [Iranian calendar] year [through the presidential election in the country].