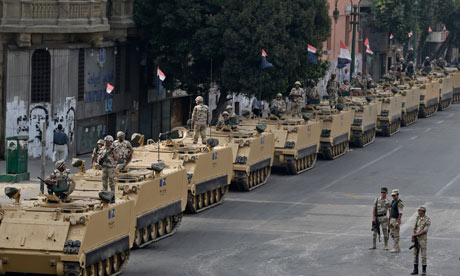 Egypt is braced for more demonstrations on Sunday, after the military-backed government signalled plans to outlaw the Muslim Brotherhood, while troops cleared a Cairo mosque of Brotherhood supporters who were protesting against the removal of President Mohamed Morsi last month.

Fresh violence fuelled a grimly confrontational mood at the end of a week that saw around 800 people killed, and fast-fading hopes for the future of the 2011 revolution that had come to symbolise the Arab spring. Talk of the risk of an Egyptian civil war is no longer outlandish. The government said that 173 people had died across the country on Friday alone. The latest victims included the son of Mohamed Badie, the Brotherhood’s leader.

William Hague has condemned the “disproportionate use of force” by the Egyptian security forces as he issued a fresh appeal to all sides to end the violence. Hague’s appeal for restraint comes as supporters of the Brotherhood in the UK are expected to stage a demonstration outside Downing Street.

Hague said that attacks on mosques and churches were unacceptable and called for places of worship to be protected. He urged the Egyptian government to return to the political road map published last month based on dialogue between parties who accepted peaceful political processes.

After two days of tense confrontation at the al-Fath mosque near Cairo’s Ramses Square, security forces on Saturday moved in to arrest the last of the protesters. The end of the standoff came after a day of rumour and confusion, punctuated by gunfire and the sound of explosions from inside the building. At one stage, live on TV, a gunman fired at soldiers and police from the minaret of the mosque, with security forces shooting back at the building – close to the capital’s main railway station.

Government loyalists swamping the surrounding streets cheered and chanted support for the armed forces’ commander, General Abdel Fattah al-Sisi, and urged the army to deal with the “terrorists” inside. But a man who said he supported the Brotherhood whispered: “The army is killing us.”

Badie’s son, Amar, was one of about 95 people killed nearby on Friday, designated a “day of rage” to protest against the carnage at the Rabaa al-Adawiya sit-in in eastern Cairo two days earlier. Morsi supporters were trapped inside during the night-time curfew and were not permitted to leave when it ended. It seemed clear that the mosque siege was intended to forestall another prolonged sit-in that would allow the Morsi camp to gain a new foothold.

In political developments, the government said that the prime minister, Hazem el-Beblawi, was “studying” plans for the legal dissolution of the Brotherhood, a move that would force it back underground and justify a crackdown that would return it to its position during the days of deposed president Hosni Mubarak and his predecessors.

“There will be no reconciliation with those whose hands have been stained with blood and who turned weapons against the state and its institutions,” Beblawi told reporters. Beblawi is a respected figure but said to be under pressure from hardline Mubarak-era security officials who were brought back after Morsi’s removal and are now orchestrating the no-holds-barred campaign against the Islamists.

Government sources hinted at attempts to split the Brotherhood by coaxing the moderate elements to break away.

Its political arm, the Freedom and Justice party, won all five elections that followed the toppling of Mubarak. Morsi – who famously promised to rule for all Egyptians – governed the country for a year until he was undermined by huge rallies called by opponents who denounced him as incompetent and partisan. Morsi’s supporters insisted his removal on 3 July was a military coup engineered by Egypt’s shadowy “deep state”. Others called it a continuation of the revolution. But plans to formally crush the Brotherhood – portrayed universally as terrorists in the official media – appear to spell an end to even slim hopes for political dialogue that might defuse the crisis.

“I have been saying that we need to keep the Brotherhood on the political field to guarantee their political and civil rights,” said the leftwing commentator Hani Shukrullah. “A considerable number of people who had been involved in the revolution from the start have been urging that.”

It is certainly hard to find Egyptians or informed foreigners who can identify a sliver of hope about the way ahead. “It’s like being in a car that’s going at 100 miles per hour and everyone wants to keep pressing down on the accelerator instead of the brake,” said the journalist Abdel-Rahman Hussein. “The course has been set and there’s no way out of this impasse after the massacre at Rabaa. This could all have been avoided, but I don’t see how we can extricate ourselves now.”

The interior ministry said on Saturday that 1,004 Brotherhood “elements” had been arrested in the past 24 hours. Among others detained were Mohamed al-Zawahiri, brother of the Egyptian-born al-Qaida leader Ayman al-Zawahiri. The ministry also said that 57 policemen had been killed and 563 wounded since Wednesday.

Fighting was reported on Saturday in Suez, where state TV showed men in civilian clothes firing a rocket-propelled grenade.

The Brotherhood shows no sign of backing down and has urged its supporters to continue taking to the streets. “Our rejection of the coup regime has become an Islamic, national and ethical obligation that we can never abandon,” it said.

The government also said that 12 churches had been attacked and burned on Friday. The Brotherhood has denied responsibility.