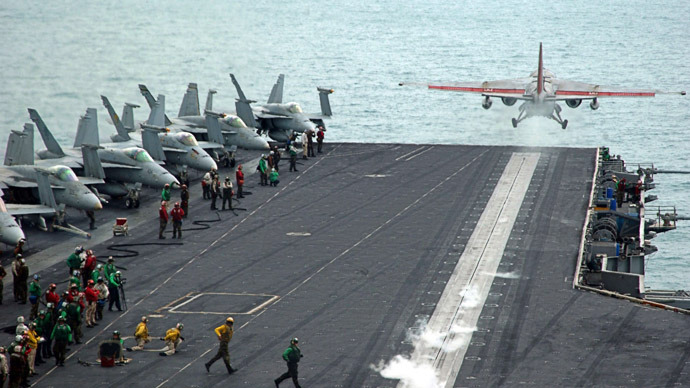 President Barack Obama has announced the cancelation of US-Egypt military exercises following the latest killings in the country, without talking about suspending Washington’s annual military aid to Cairo.

“While we want to sustain our relationship with Egypt, our traditional cooperation cannot continue as usual when civilians are being killed in the streets and rights are being rolled back,” Obama said on Thursday.

“As a result, this morning, we notified the Egyptian government that we are canceling our biannual joint military exercise, which was scheduled for next month,” he added.

A joint military exercise, called Operation Bright Star, had been due to take place in the Sinai region next month.

Isobel Coleman, senior fellow at the Council on Foreign Relations, said the cancellation of military exercises is only “an incremental step that’s really too little, too late at this point.”

More than 600 people were killed during clashes between Egyptian security forces and supporters of ousted President Mohamed Morsi on Wednesday.

The US president also said that his government “strongly condemns” the violence in Egypt.

“We deplore violence against civilians,” he said. “Let me say that the Egyptian people deserve better than what we’ve seen over the last several days.”

Meanwhile, the US State Department issued a travel warning on Thursday, warning American citizens not to travel to Egypt and urging those already there to leave the country.

Obama, however, did not announce suspension of $1.3 billion annual military aid to Egypt.

Obama refused to describe the military’s removal of Morsi as “a coup,” a declaration that would require ending US aid to Egypt. Some American lawmakers called on the Obama administration to cut off aid to Egypt.

“While President Obama condemns the violence in Egypt, his administration continues to send billions of taxpayer dollars to help pay for it,” Republican Sen. Rand Paul said.