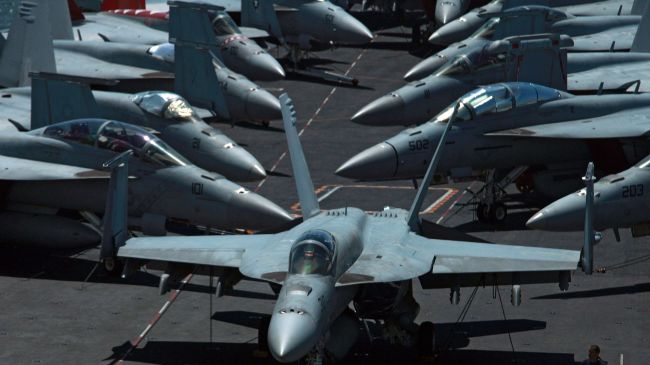 US sends warship to Bahrain amid regime crackdown

The USS Nimitz aircraft carrier, one of the largest warships in the world, has been stationed off the coast of Bahrain as the kingdom steps up its brutal crackdown on anti-regime protesters.

The warship moved towards Bahrain in recent days, with the USS Truman in close proximity as part of its fresh 9 month deployment to the Persian Gulf.

The Nimitz, with a crew of 5,000 sailors, arrived in Bahrain for a five-day port visit.

The deployment came ahead of August 14 celebrations of Bahrain’s independence from the United Kingdom which unleashed a fresh wave of protests against the US-backed regime.

US embassies and consulates across the Middle East and North Africa were closed last Sunday after the US intelligence community claimed it had intercepted “chatter” between senior al-Qaeda members indicating a “major” attack this month.

At the US Navy base in Bahrain, where the US Fifth Fleet headquarters is located, US officials said operations were “normal and regular.”

The popular protest movement in Bahrain began on 14 February 2011.

The Al Khalifa regime promptly launched a brutal crackdown on the peaceful protests and called in Saudi-led Arab forces from neighboring states.

The protesters call for the downfall of King Hamad bin Isa Al Khalifa.

According to The New York Times, the slogans are also increasingly more anti-US, denouncing Washington for arming and supporting the Bahraini regime.

In May, the administration of US President Barack Obama resumed a large arms deal to Bahrain angering opposition activists in the country who saw the deal as a signal that the US supports the kingdom’s repression of pro-democracy protests.

The US had frozen the $53 million deal to sell military equipment to Bahrain in September.