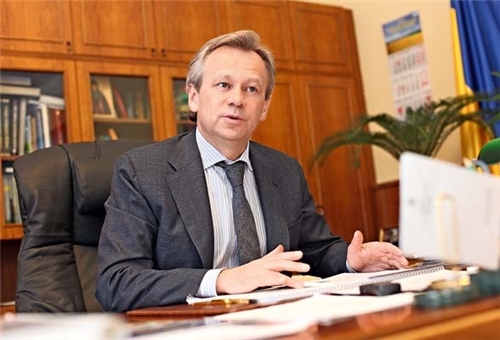 TEHRAN (FNA)- Ukrainian Agrarian Policy and Food Minister Mykola Prysyazhnyuk stressed his country’s enthusiasm for the further expansion of ties and cooperation with Iran, and expressed the hope that trade interactions between the two countries would increase in the near future.

“Ukraine is interested in increasing trade ties with Iran and the meeting of two countries’ joint (economic) commission will be held again soon after a 9-year pause,” Prysyazhnyuk said in a meeting with an Iranian media delegation in Kiev on Monday afternoon.

He expressed the pleasure that the relations between Iran and Ukraine have been activated in the last three years, and said, “The trade and cultural ties between the two countries are at a desirable level.”

“I hope that the volume of goods exchanges between Iran and Ukraine will be three to five folded,” Prysyazhnyuk said.

Speaking in a meeting with Ukrainian Deputy Prime Minister Kostyantyn Hryshchenko, Rouhani said, “The two countries have had good relations in agricultural and industrial fields.”

The Iranian president noted that there are always different ways for the further expansion of the bilateral ties, which need to be studied.

The Ukrainian deputy prime minister, for his part, said that his country welcomes broadening of relations with Iran, specially in cultural fields.