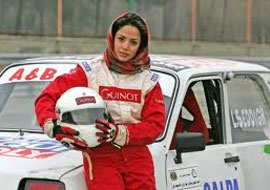 IBNA: Speaking with IBNA, Sedigh said she has translated a book by Danny Sullivan into Persian entitled as ‘Going Faster! Mastering the Art of Race Driving’. The book is the main source referred to at Skip Barber Racing School.

She said she picked the book from among a number of valuable rally driving pamphlets she came across during her sporadic visits from foreign countries and driving schools.

Head of the women’s’ education department of the Motorcycle and Automobile Federation of the Islamic Republic of Iran (MAFIRI), Sedigh added that she has offered the Persian rendition of the book to the federation for consideration and publication for the interested readers.

She went on to say that the visual translation is arranged in 280 pages encompassing various racing topics.

She further underscored the training methods used in Iran for race driving as traditional and asserted that translation of such books and stuff would be a great help to promotion of the sports in the country.