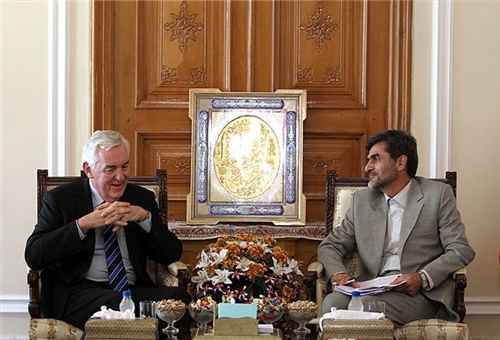 TEHRAN (FNA)- Iranian and Australian officials in a meeting in Tehran conferred on the latest developments in bilateral relations between the two countries, and underlined the necessity for doubling efforts to further develop ties and cooperation.

The issue was raised in a meeting between Head of Iran-Australia Parliamentary Friendship Group Mehdi Kouchakzadeh and Australian Ambassador to Tehran Paul Feely on Monday.

During the meeting, Kouchakzadeh termed scientific, cultural and trade cooperation an important step in developing relations between the two countries, and said, “The big and powerful countries should be after the development and expansion of constructive interactions with other countries based on their national interests and mutual respect.”

Feely, for his part, underscored his country’s eagerness to increase cooperation with Iran in tourism, trade, economic, scientific and cultural fields.

The Australian envoy, in a Sunday meeting with Chairman of the Iranian Parliament’s National Security and Foreign Policy Commission Alaeddin Boroujerdi, also underlined Iran’s vital role in settling regional crises and establishing peace and tranquility in the region, and called for more cooperation among the regional states in all fields, specially in security affairs.

He said his country welcomed Iran’s policy on interaction with different countries and added that Tehran plays a very sensitive role in resolving regional crises.

Feely called on countries involved in regional issues to help promote sustainable peace and development in the region through security and economic cooperation.