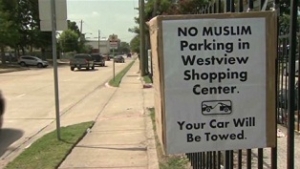 “I’m very shocked because we do live in a society that’s supposed to be very accepting, and this is what we all preach,” Yara Aboshady told CNN affiliate KPRC on Friday, August 9.  .

Aboshady was commenting on the new signs lined the street near the El Farouq Mosque, where Muslims heading to worship services said they were offended.

The signs, written in black letters, read, “No Muslim parking in the Westview Shopping Center. Your car will be towed.”

El Farouq Mosque sits across the street from the shopping center, in front of which the signs were put.

The shopping center’s employees refused to talk to media or admit who put the signs.

One worker, however, said the shopping center owner, Steve Kwon, posted the signs.

“I did not put up the signs,” Kwon said.

After speaking with KPRC, Kwon removed the signs.

All across the US, mosques have been facing fierce opposition recently.

Requests by Muslim residents to build mosques have repeatedly been denied on different grounds ranging from local opposition to zoning problems.

But Muslims see the repeated denials of their worship places as a reflection of the growing animosity against their minority since the 9/11 attacks.

In the last five years, there has been “anti-mosque activity” in more than half of the US states, according to the American Civil Liberties Union.

At least 18 mosque projects — from Mississippi to Wisconsin — have found foes who battle to stop them from seeing light citing different pretexts, including traffic concerns and fear of terrorism.

Even more, some mosques were vandalized including a 2011 Wichita mosque arson case for which a $5,000 reward is being offered.

Despite the shopping center’s owner denial, the signs were deemed shocking to many Muslims.

“I feel sorry for the person who wrote it,” said Ahmed Hassan.

“This is what comes to mind because obviously he has a lot of hate.”

“It could be no parking for the sake of patrons that come in,” Aboshady said.

“Or it really could be a prejudice and just a mean thing to say.”

Yet, Muslims saw these signs as insensitive and offensive.

Although there are no official figures, the United States is believed to be home to between 6-8 million Muslims.

A Gallup poll had found that the majority of US Muslims are patriot and loyal to their country and are optimistic about their future.