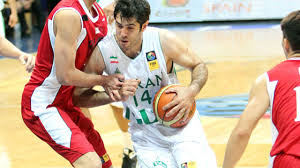 MANILA, Philippines—Perhaps he had an eye on one of two spots open in the New York Knicks roster.

For whatever reason, Iranian Hamed Hadadi was on the court in the fourth quarter Saturday afternoon even with Jordan no longer in the same zip code as Iran in the Fiba Asia Championship as far as their quarterfinal showdown was concerned.

That’s when a major concern arose for Iran.

But as he met with an Iranian television crew and a few journalists after Iran’s 94-50 victory over rival Jordan, the 7-foot-2 Hadadi brushed off speculations he was seriously hurt.

Four rows back from the Iran bench, Gary Boyson, a scout for the New York Knicks, was watching the game intently.

“Actually, I’m here to evaluate all the players in the tournament,” said 45-year-old Boyson, who has 16 years experience working as a scout for the NBA. “It’s no secret there are players here with NBA experience who have no contracts yet.”

It’s no secret, though, that Hadadi is one of Boyson’s prospects. So is China’s young center Wang Zhelin.

Maybe that’s why Hadadi was still on the court when he didn’t need to be anymore.

Or maybe there were other reasons.

“We don’t know what’s happening inside or what the coach was thinking,” said former Iran coach Rajko Toroman, who once coached Gilas Pilipinas. “Maybe he wants to give him minutes after a season in the NBA where he didn’t play too much. I suppose it’s the reason he’s there because up by 35 points, there’s no need for him to be there.”

“Maybe the coach wanted to give him extended minutes going into the semifinals,” added Toroman. “Probably in this kind of the game, there’s no need for him to be in the floor in the fourth quarter.”

Hadadi, who finished with 20 points and eight rebounds, was telling everyone at courtside that he had cramps. When he spoke with Toroman after the game, however, he gave a different diagnosis.

“He told me he pulled a muscle in his right leg,” said Toroman.

He will be reevaluated today.

Iran’s Asghar Kardoust also suffered an injury late in the match and had to be carried off the court.

“They created some problems for themselves,” joked Toroman, “but that’s basketball.”

Iran coach Mehmed Becirovic defended his decision to leave Hadadi on the floor with the game already beyond reach.

“It’s like a practice for us,” he said. “I’m not looking at the scoreboard. I just want to be prepared for the next round.”

“We have a spot or two probably. We’re just trying to evaluate players all over the world,” said Boyson.

Boyson said he is also taking a look at Gilas Pilipinas, but did not reveal much, except to say “it’s not necessarily about today.

“It’s about maybe putting someone on our database now and see how they project over the years, how they improve and how they’re progressing,” he said.
By Inquirer.net