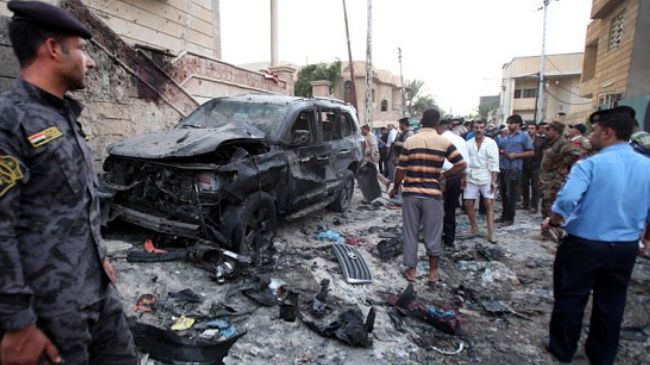 Five killed in bomb attack near park in south Baghdad

A bomb attack has killed at least five people, including two children, and wounded 16 others near a park south of the Iraqi capital, Baghdad.

Police officials said the bomb went off in the town of Zubeidiyah on Saturday afternoon, as families were celebrating the Eid al-Fitr holiday, which marks the end of the fasting month of Ramadan.

The majority of those being injured were reportedly women and children.

The fresh attack came after Iraqi security officials imposed tight security measures across the country for the Eid holidays.

Violence has risen sharply in Iraq in recent months. Some 671 people have been killed in the holy month of Ramadan alone, making it the bloodiest month since 2007.

On Friday, eleven people were killed and 22 others wounded after two bombs exploded close to a security checkpoint in the village of Zangoura near the central Iraqi city of Ramadi.

Iraqi authorities said 36 people were killed in a series of bombings late Thursday that targeted soccer fans watching the Confederations Cup semifinal between Spain and Italy in cafes in and around Baghdad.

On Tuesday, nearly 50 people were killed and scores of others were injured in a series of car bombs targeting busy markets and shopping streets in and around Baghdad.

More than 4,000 people have died in terrorist attacks in Iraq so far in 2013, with Baghdad province being the worst hit.