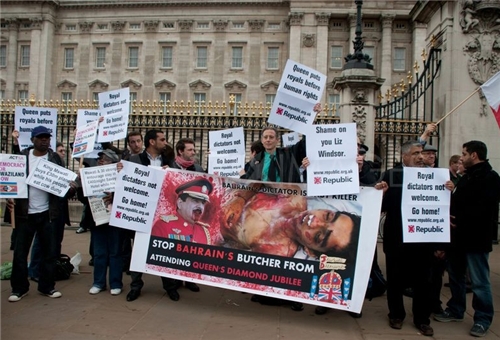 The protestors staged a rally in front of the office of British Prime Minister David Cameron to condemn London’s policy of supporting the suppressing regime in Bahrain, Al-Alam reported.

The political activists have chanted slogans against the Al Khalifa regime in Bahrain, urging the British government to change its stance towards the oppressing regime.

They spoke out that several international organizations enlisted Al Khalifa regime in Bahrain among violators of human rights.

The protestors called on the British government to put pressure on Manama regime to kick off reforms and take steps in the way of democracy and justice in Bahrain.

The activists noted they are not afraid of brutal crackdown by the regime’s security forces and are determined to continue anti-regime protests especially on August 14.

Stricter penalties for protests in Bahrain were enacted on July 31, and the revisions include increasing the detention period for committing or inciting an act of terrorism.

But critics believe the toughened laws will be used against peaceful protesters – not just those committing “terrorist” activities.

The UN expressed concern that the amendments – which are supposedly intended to protect the population from terrorism – may negatively impact human rights.

The uprising in Bahrain began in mid-February 2011, when the people, inspired by the popular revolutions that toppled the dictators of Tunisia and Egypt, started holding massive anti-government demonstrations.