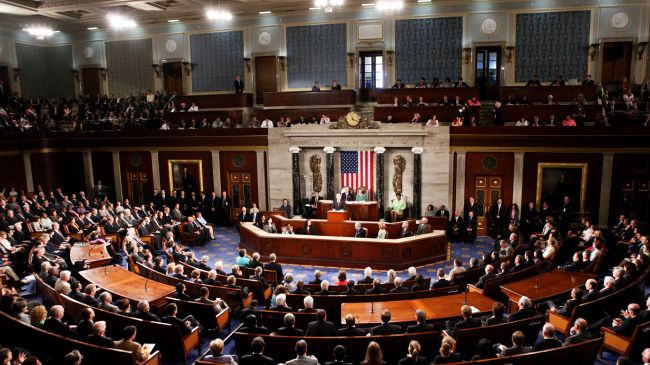 A view of the US House of Representatives

An analyst has described the US-led sanctions regime against Iran as counterproductive, saying the so-called “coercive diplomacy” approach has only lead to “structural violence” against the Iranian nation.

In an article published on worldpolicy.org, Ali Fathollah-Nejad said imposing economic sanctions is “one of the most preferred instruments of Western foreign policy” as demonstrated in the cases of Iraq and Syria.

Although the sanctions are presented as a “purely diplomatic approach,” they are in fact “a form of ‘structural violence’ exerted upon an entire country and its people,” the analyst said.

“It should be stressed that policymakers in the West have so far devoted much more time and energy to identifying which new set of sanctions to impose rather than to committedly and creatively finding a diplomatic solution of the decade-old stalemate.”

The US, Israel and some of their allies claim that Iran may be pursuing non-civilian goals under the cover of its nuclear energy program, with Washington and the European Union using the unfounded allegation as a pretext to impose illegal sanctions on the Islamic Republic.

In its latest move, the US House on July 31 approved a bill to impose tougher sanctions on Iran’s oil exports and other economic sectors including automotive, mining and construction, and commits the United States to the goal of ending all Iranian oil sales worldwide by 2015.

Tehran has categorically rejected the Western nuclear accusations, arguing that as a signatory to the Non-Proliferation Treaty and a committed member of the International Atomic Energy Agency, it is entitled to develop nuclear technology for peaceful purposes.

Fathollah-Nejad further warned that the sanctions could also have dire external consequences such as war and “destabilization of an already too fragile regional balance.”

“Ultimately, the policy of sanctions is counter-productive on multiple levels, most sensitively on diplomatic and socio-economic grounds. The sanctions – whether called ‘crippling’ or ‘targeted’ – disproportionately affect the civilian population,” he said.

“‘Smart sanctions’ are very much an oxymoron as ‘smart bombs’ which allegedly function in surgical precision. And like their military counterparts, ‘targeted sanctions’ inflict extensive ‘collateral damage.’”