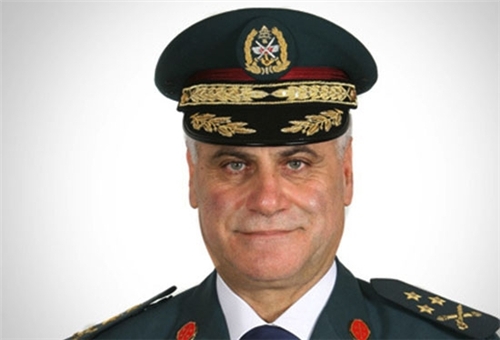 TEHRAN (FNA)- Lebanese Army Commander General Jean Qahwaji in a meeting with senior officers on strategies, policies and missions, stressed that his country’s army will stand firm against any possible Israeli aggression to preserve internal security.

Qahwaji further noted the efforts made by the army to protect Lebanon, and said military martyrs protected the citizens in the different Lebanese areas, Al-Manar reported.

The Army Commander called on the officers to be alert during this critical stage, reminding that a number of challenges are encountering the military, including, the terrorist attacks that targeted different Lebanese districts through missiles and bomb blasts.

He also warned of the repercussions of the Syrian crisis on the Lebanese-Syrian borders and the burden of the displaced Syrians.

“As the political fragmentation storms the country, the army has to keep its unity,” Qahwaji asserted, addressing the officers.In a different context, Qahwaji revealed that the army is preparing a blueprint to sustain its cooperation with the media outlets for the sake of the national interest.