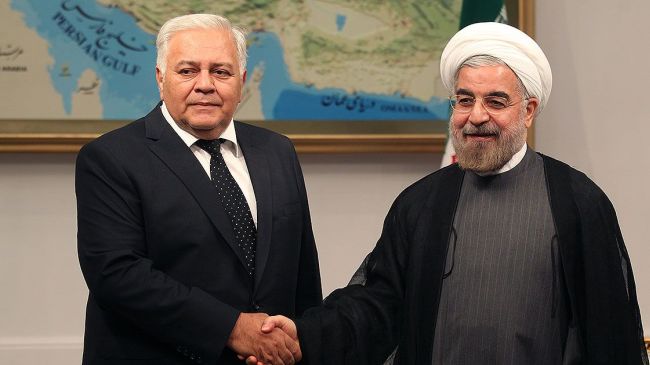 Iranian President Hassan Rohani says the Islamic Republic has always favored expansion of ties with all countries of the world, particularly friendly and neighboring states.

In a meeting with National Assembly of Azerbaijan Speaker Ogtay Asadov in Tehran on Monday, Rohani said cooperation between Tehran and Baku can help enhance and consolidate regional ties.

The Iranian president also pointed to the good parliamentary relations between Iran and Azerbaijan, stating that such relations can serve common goals on the regional and international stages and also benefit both Iranian and Azerbaijani nations and governments.

Rohani also expressed gratitude to Azerbaijani officials over the participation in his inauguration ceremony.

Asadov, for his part, described the Islamic Republic of Iran as an important country in the Middle East and said Baku favors further expansion of diplomatic relations and cooperation with Tehran in diverse areas.

He stated that the Azerbaijani parliament supports mutual, regional, and international cooperation between the two countries to achieve common goals.

On Sunday, President Rohani took the oath of office in Majlis one day after being endorsed by Leader of the Islamic Revolution Ayatollah Seyyed Ali Khamenei.