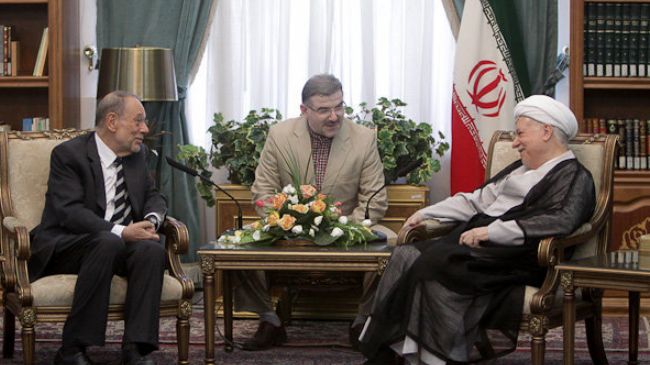 Chairman of Iran’s Expediency Council Ayatollah Akbar Hashemi Rafsanjani has criticized the United States for its double-standard policies toward the Islamic Republic.

During a Sunday meeting with former European Union foreign policy chief, Javier Solana, in Tehran, Rafsanjani denounced double-standard approaches taken by US administration and the House of Representatives as “dubious,” adding that no negotiations could come to fruition with threats and sanctions.

He also highlighted that a new era has started in Iran’s foreign policy based on mutual respect and trust.

Earlier in the day, Iranian President Hassan Rohani called on Western governments to stop using the language of sanctions to address the country.

The new chief executive noted that the only way for interaction with Iran is “dialog on equal footing, mutual confidence-building, mutual respect and reduction of hostilities.”

In its latest measure against Iran, the US House of Representatives approved a bill last Wednesday to impose tougher sanctions on Tehran’s oil exports and financial sector.