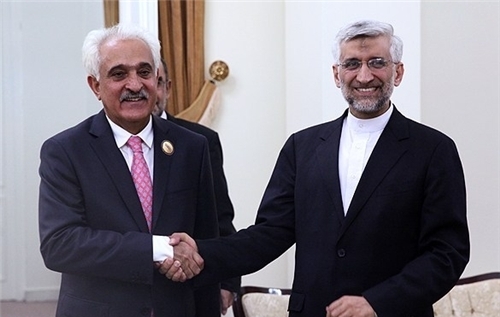 During the meeting on Sunday night, Jalili stressed the deep and friendly relations between Iran and Afghanistan, and said endorsement of the document will strengthen and expand mutual strategic cooperation in different arenas.

“Preparing and implementing the document will be a bright step in the history of the relations between the two countries,” he added.

Spanta, for his part, said endorsement of the agreement heralds enhancement of ties between the two countries in different fields to the strategic level, stressing that its implementation would serve the interests of both the Iranian and Afghan nations.

In relevant remarks on Sunday afternoon, Iran’s President Hassan Rouhani and his Afghan counterpart Hamid Karzai stressed the need for the expansion of bilateral ties between two friendly countries in all fields.

Iran and Afghanistan have lots of commonalties and potentials which must be used to maximize bilateral ties between two neighboring nations, the new Iranian president said.

He added that the Persian-speaking countries of Iran, Afghanistan and Tajikistan can expand comprehensive cooperation among them more than ever before.

Karzai, for his part, expressed the hope for broadening mutual cooperation between Tehran and Kabul during the new Iranian administration.

Karzai and his entourage traveled to Iran to participate in President Rouhani’s inauguration ceremony on Sunday.

Iran has also contributed more than $50mln annually to Afghan anti-narcotics efforts in the last 8 years.