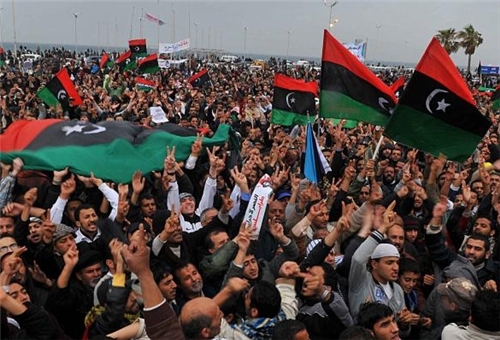 TEHRAN (FNA)- Libya’s Deputy Foreign Minister Abdul-Razzaq al-Greidi in a meeting with his Iranian counterpart Hossein Amir Abdollahian appreciated Tehran for its assistance to Tripoli, and said the Libyan nation will not allow the revolution to be deviated from its main path.

“The Libyan nation has had difficult years and has dedicated many martyrs to materialize the goals of its revolution and it will not allow its revolution be diverted from the main path,” Greidi said during the meeting in Tehran on Monday.

Amir Abdollahian, for his part, expressed the hope that the Libyan nation would be able to settle its problems by maintaining national unity and independence.

During the meeting, the two sides also studied different aspects of bilateral ties as well as international issues, and underlined the necessity for the improvement and development of bilateral relations and cooperation in political and economic spheres.

Iran has striven to expand its relations with Libya after the collapse of Qaddafi’s regime.

In October, former Iranian First Vice-President Mohammad Reza Rahimi, in a congratulation message to the newly elected Libyan Prime Minister, voiced Tehran’s readiness to share experiences with Tripoli to reconstruct the economic infrastructures of that country.