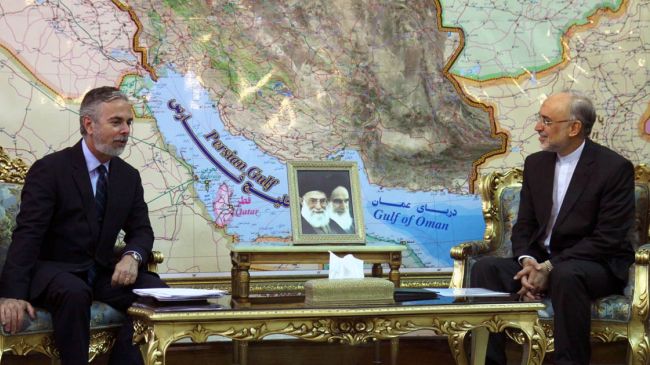 Iranian and Brazilian foreign ministers have met in the capital, Tehran, in an effort to further expand bilateral relations between the two countries.

Salehi said Iran and Brazil have high capacities for cooperation and are able to exchange their experiences and achievements in different fields.

The Iranian minister added that there is no obstacle to the further enhancement of Tehran-Brasilia ties.

The Brazilian foreign minister, for his part, underlined Iran’s political and cultural roots in the region, noting that his country considers the Islamic Republic as an important partner for economic cooperation.

The Brazilian foreign minister has travelled to Iran to take part in the swearing-in ceremony of Iranian president-elect Hassan Rohani.

Earlier in the day, Leader of the Islamic Revolution Ayatollah Seyyed Ali Khamenei formally endorsed Rohani for a four-year term in office in the presence of high-ranking local officials.

The president’s swearing-in ceremony will be held on Sunday with the participation of Iranian officials as well as foreign dignitaries. Eleven presidents, two prime ministers and seven parliament speakers are to participate in Rohani’s inauguration.