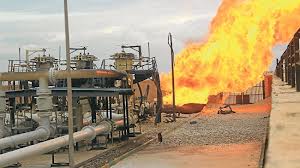 It was not clear what caused the blast, which took place around 60 km (40 miles) west of Kirkuk, but it is another indication that Iraqi energy installations are becoming more vulnerable to technical glitches and insurgent attacks.

“A blast and fire halted gas flow through a domestic pipeline transporting gas to power stations in Baiji, Mosul and Taji near Baghdad at 3:30 am local time,” said oil ministry spokesman Asim Jihad.

“The reason behind the blast is not clear yet and our crew has started repair work which could take 2-3 days”.

Security in Iraq has been deteriorating in recent months as Sunni Islamist insurgent groups including al Qaeda regain momentum in their insurgency against the Shi’ite-led government.

Bombs and leakages have repeatedly interrupted oil flow through the pipeline linking Kirkuk to the Mediterranean port of Ceyhan, and repair crews sent to fix the damage have come under attack. The pipeline has been idled since Wednesday.