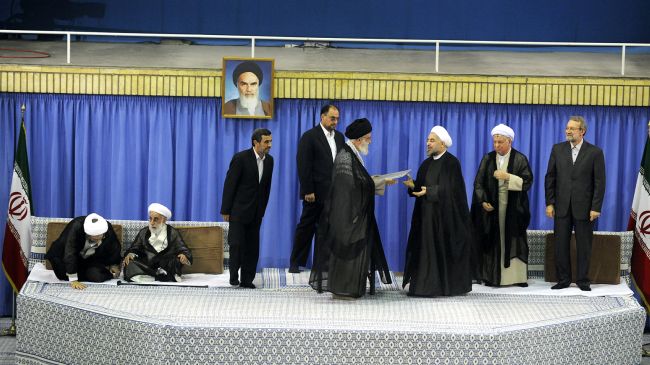 Leader of the Islamic Revolution Ayatollah Seyyed Ali Khamenei has endorsed Hassan Rohani for a four-year term in office as Iran’s new president.

In a statement issued on Saturday, the Leader said massive voter turnout in the election and choosing a competent candidate who has served the Islamic Republic for more than three decades sent a clear message to everyone.

“…[it sent] the message of unwavering loyalty to the [Islamic] Revolution, the message of trust and hope in the Islamic Republic and trust in brave and pioneering clergy,” the statement added.

The statement was read by Chief of Staff of the Leader of Islamic Revolution, Hojjatoleslam Mohammad Mohammadi-Golpayegani during the endorsement ceremony.

The endorsement ceremony was attended by senior Iranian officials in the capital city of Tehran.

At the beginning of the ceremony, Iran’s Interior Minister Mostafa Mohammad-Najjar presented a report about the June 14 election.

The president’s swearing-in ceremony will be held on Sunday with the participation of Iranian officials as well as foreign dignitaries.

Rohani will take the oath of office in Majlis on Sunday. He succeeds Mahmoud Ahmadinejad, whose two legally allowed consecutive terms end on Saturday.