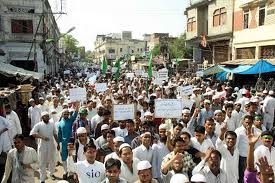 Deploring Israel’s illegal occupation of Holy land, Muslims, under the banner of National Council of Shia Ulema (NCSU), holding banners and placards depicting solidarity with the Muslims of Palestine and condemning the US, Israel and their other allies, raised slogans against the bullying powers.

They stressed the demand for the liberation of Baitul Muqaddas, Mosque, a highly religious place for the Muslims worldwide, illegally occupied by the Israeli Regime.

The speakers also condemned the US and Israel who have unleashed unparalleled terrorism, oppression, plunder and killings against the Muslims.

The US presence in the region aimed to support the Zionist regime and intimidate regional states, the speakers said. Adding that the US interference in Irans affairs and threats against a peaceful country are all inter-related. It is high time for the Muslims worldwide to forster unity and take stand against these powers.

Condemning the pro-US rulers of the Muslim countries, the speakers said that they were equally responsible for the plight of the Muslims across the globe. They urged the Muslims to keep the pitty differences at bay and stand against these bullying powers to counter their malicious plots.

Later-on a memorandum, condemning the illegal occupation of Baitul Muqaddas and the atrocities against Palestinians conducted by the Israeli regime, was presented to the UN office in India and the Prime Minister Dr. Mamohan Singh.

The memorandum, stressing upon the demand for the liberation of sacred land from the clutches of Zionist, demanded the restoration of the basic principles of the Indian Foreign Policy under which Indias solidarity with the Palestinian people and its attitude to the Palestinian question was given voice through our freedom struggle by Mahatma Gandhi, Father of the Nation.