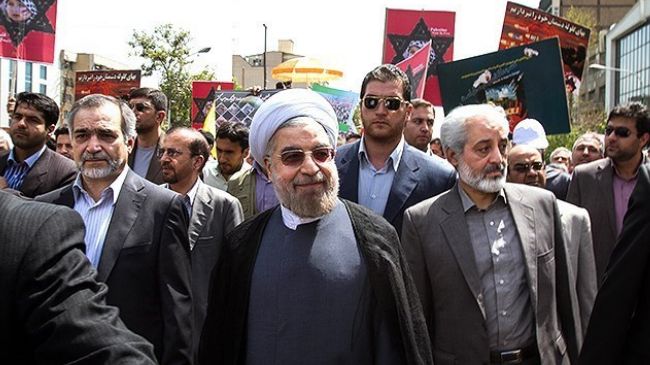 Iranian President-elect Hassan Rohani has highlighted the significance of marking the International Quds Day rallies, saying this is the day when Muslims display their unity and resistance in the face of oppression.

Participation in the rallies constitutes strong political and spiritual support for the Palestinian people in their struggles to achieve their causes and liberate al-Quds, Rohani said while attending the rallies in Tehran on Friday.

Rohani went on to say, “Under the pretext of reconciliation, Israel continues [to maintain] its aggressive nature and the Israelis think this is an appropriate chance to show a seemingly peace-seeking face, but they continue with their aggression on the inside.”

Since early Friday, millions of Iranians from all walks of life have taken to the streets nationwide to voice their solidarity with the oppressed Palestinian nation and express their anger at the policies of the Tel Aviv regime and its allies.

People in more than 80 other countries have also observed the event.

In August 1979, the late founder of the Islamic Republic Ayatollah Khomeini declared the last Friday of the Muslim holy month of Ramadan as International Quds Day, calling on Muslims across the world to mark the annual occasion by holding street rallies.