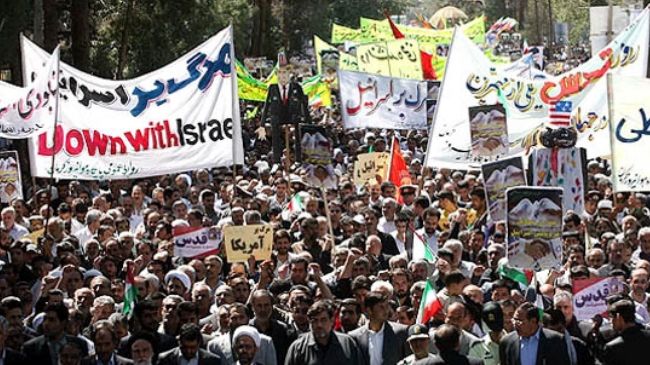 Massive rallies are underway across Iran on International Quds Day in support of the Palestinian resistance against the Israeli regime.

Millions of Iranians from all walks of life took to the streets nationwide on Friday in solidarity with the oppressed Palestinian nation, voicing their anger at the policies of the Israeli regime and its allies and calling for the liberation of Palestine.

The Iranian marchers are carrying placards and chanting slogans against the United States and Israel. Millions of other people from more than 80 other countries will also be holding rallies to commemorate the event.

On Thursday, Iran’s Foreign Ministry called on the Iranian nation as well as Muslim nations and freedom-seekers across the world to take part in International Quds Day rallies to show their opposition to the Israeli regime.

In a statement, the ministry said that the clear message conveyed by the Palestinian resistance and the Islamic Awakening in the Middle East is that the only way to save the Palestinian nation is for the Palestinian people and leaders to remain united and stand up to the occupying Israeli regime.

It also emphasized that the root cause of the Middle East crises is the continuation of the occupation of Palestine and of Israeli brutalities.

On Monday, Iranian lawmakers also urged the Muslim nations of the world to participate in International Quds Day rallies and reveal US-Israeli plots in Syria, Egypt and Tunisia and the treason of certain Arab states.

“The Muslim nation of Iran along with other Muslims and freedom-seekers will once again stand up and announce its support for the Palestinian nation and other Muslim nations,” said 207 Iranian parliamentarians in a statement.

In August 1979, the late founder of the Islamic Republic Ayatollah Khomeini declared the last Friday of the Muslim holy month of Ramadan as International Quds Day, calling on Muslims across the world to mark the annual occasion by holding street rallies.