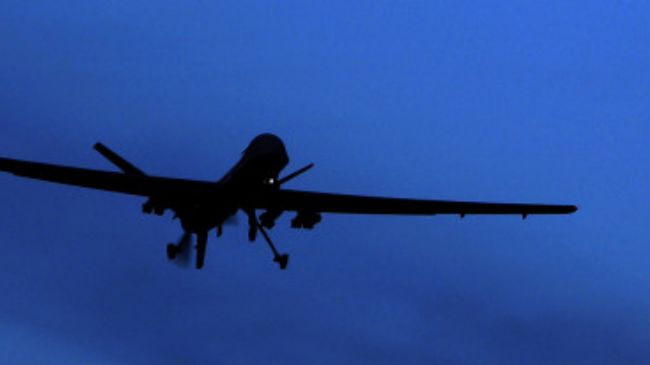 A US assassination drone strike has killed at least four people in Yemen, the third of such attacks in the last five days.

The drone strike was carried out in the southeastern province of Hadramawt on Thursday.

The attack came ahead of scheduled talks between Yemeni President Abdrabuh Mansur Hadi and US President Barack Obama in Washington.

On Tuesday, a US killer drone targeted a car in the southern province of Shabwa. Three people were killed in the strike.

The United States often uses its assassination drones to hit targets in Yemen and some other countries, including Pakistan and Afghanistan.

Washington claims the drones target “militants,” but the facts on the ground show that civilians are frequently killed in the airstrikes.

According to the Washington-based New America Foundation, the US killer drone attacks in Yemen almost tripled in 2012.

In April, Yemeni National Organization for Defending Rights and Freedoms said the US drones had conducted more than 80 attacks in the country in 2012.

Washington has come under fire for increasing the drone attacks in Yemen.

Yemenis have held demonstrations on several occasions over the past months to condemn the US for violating Yemen’s sovereignty by the drone strikes.