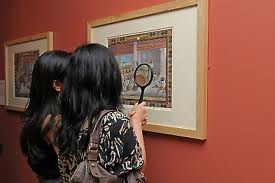 A new exhibition of modern Iranian art will showcase the work of 26 artists from the 1950s to the 1970s, when global art movements particularly influenced Iranian artists, the Asia Society Museum in New York is announcing on Monday. The show — coming amid stirrings of hope that Iran’s international relations will relax under its new president, Hassan Rouhani — will include more than 100 works that focus on what the museum calls the little-known pre-Islamic Revolution era.

The exhibition will show the extent to which Tehran was what the museum calls a cosmopolitan arts center, with artists participating in the Venice Biennale and other international festivals, and their work was collected widely. The exhibition includes artists still at work in Tehran, like Monir Shahroudy Farmanfarmaian, known for her mirror mosaics. Another, Nicky Nodjoumi, is described as a more politicized artist who now lives in New York. Other prominent artists included are Siah Armajani, a sculptor residing in the United States, and Parviz Tanavoli, a sculptor well known in pre-revolutionary Iran who now lives in Canada.

The museum’s director, Melissa Chiu, said the artists’ themes varied. Some explored abstraction and wanted to be part of an international movement; others were more interested in focusing on politics in Iran; and some were critical of forces at work before and after the 1979 Islamic Revolution. “This very period in Iran represented a real opening up and connecting to the world,” she said. “Now it is a more subdued scene.”

She added that “artists have found it hard to show their work” and said: “Many have left the country and find themselves in Dubai and elsewhere. There was so much optimism then.” Ms. Chiu said the exhibition would be the first to examine the pre-revolutionary period on this scale by drawing together works lent from public and private collections around the world, including from institutions in the United States as well as eight countries in Europe and the Middle East. The exhibition will run from Sept. 6 to Jan. 5.