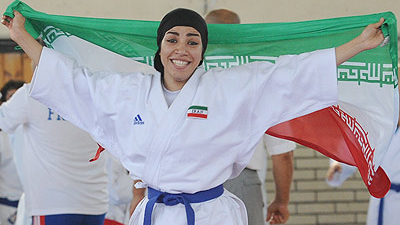 Iran’s karate practitioner Mojdeh Mardani has clinched a gold medal at the 2013 Summer Deaflympics, originally known as the World Games for the Deaf, in Bulgaria.

On Tuesday, the hearing-impaired Iranian sportswoman exhibited impressive individual kata performance in the National Sports Academy of the Bulgarian capital city of Sofia, and could overcome her Russian, Ukrainian and Turkish competitors in her march to the final bout.

She defeated her Venezuelan opponent in the final competition to take home the gold medal.

Russians claimed the top spot and grabbed the gold medal. Turks stood in the second position.

Kata is often described as a set sequence of karate moves organized into a pre-arranged fight against imaginary opponents. The kata consists of kicks, punches, sweeps, strikes and blocks.

The international multi-sport event was first held in Paris in 1924 and now includes almost 5,000 competitors.

A team of 82 Iranian athletes are in action across nine sports. They are competing in athletics, football, judo, karate, swimming, volleyball, Greco-Roman and freestyle wrestling, table tennis and taekwondo.

Iranians have so far collected 11 medals, including one gold, two silver and eight bronze.