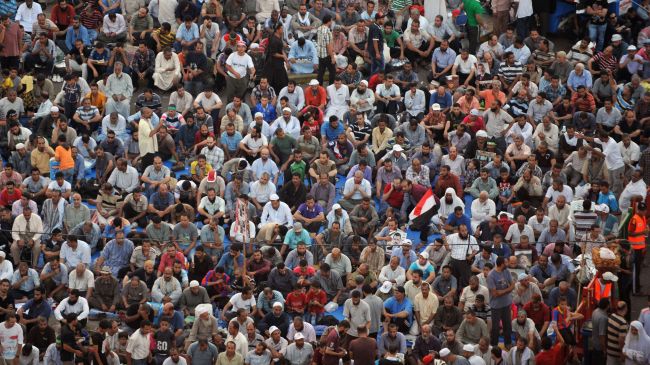 Supporters of Egypt’s ousted President Mohamed Morsi continue their march on the military intelligence headquarters in Cairo amid a looming state of emergency by the army.

Muslim Brotherhood spokesman Murad Ali said in the early hours of Monday that the demonstrators had set off from Rabia al-Adawiya Mosque in the north of the capital.

The army warned the Morsi supporters “not to come close to military facilities in general, and the headquarters of military intelligence specifically.”

Egypt’s National Defense council has warned that security forces will take “decisive action” if protesters “exceed their rights to peaceful, responsible expression of their opinions.”

The show of determination by the supporters of the ousted president comes after a bloody July 27, when at least 150 people were killed and scores of others injured in clashes during rival demonstrations by supporters and opponents of Morsi across the country.

The clashes followed a gathering of Morsi supporters in Cairo’s Nasr City district. The crowd demanded the reinstatement of the ousted president.

Tension has intensified in Egypt since the head of Egypt’s armed forces, General Abdel-Fattah al-Sisi, announced on July 3 that Morsi was no longer in office. He also suspended the constitution and dissolved the parliament.

On Sunday, three people died in clashes between supporters and opponents of Morsi in the cities of Port Said and Kafr El-Zayat, a security source reported.

On July 26, a court in Egypt ordered Morsi be detained over a string of accusations, including killing soldiers.

Since his ouster, Morsi has been held by the army at an undisclosed location.

The United Nations has strongly condemned the upsurge of violence in Egypt. UN Secretary General Ban Ki-moon has called on all sides of the violence to exercise “maximum restraint.”