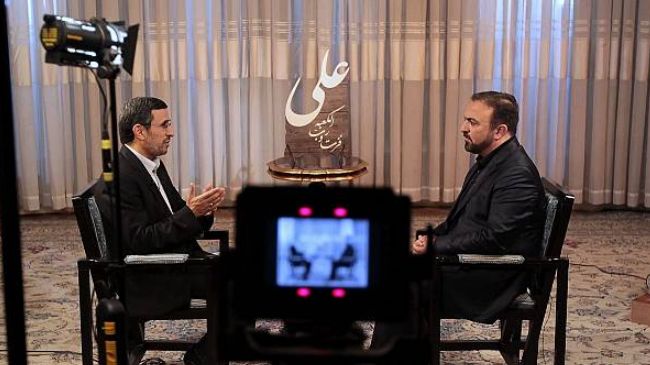 Outgoing Iranian President Mahmoud Ahmadinejad has enumerated his achievements during his eight years in office.

In a nationally televised interview Sunday night, Ahmadinejad said he takes pride in being the first head of state to defend the rights of the Palestinian nation while being personally present in the occupied Palestine’s backyard.

Pointing to his state visit to Lebanon in October 2011, Ahmadinejad said, “I was the first president to be present along the borders of the regime occupying Quds (Jerusalem), [just] 400 meters from the Zionists as 40 enemy aircraft were flying around, and there I defended the rights of the Palestinian nation and announced to the human community that the Zionists’ days are numbered.”

The president said he made 115 international trips during his two terms in office, and noted his first and foremost task was to engage in dialog with nations.

Referring to the many interviews he gave to foreign media as well as his presence in public forums in different countries, the Iranian president said, “We spoke directly to people during our trips to countries around the world … in which we talked about human dignity and rejection of oppression.”

President Ahmadinejad further described as important Iran’s role in reforming the nuclear Non-Proliferation Treaty (NPT) during the UN’s NPT review conference back in 2010, underlining that during the event, which he attended, 10 of Tehran’s 11 proposals were accepted and approved.

“Under the guise of this conference, they (Western powers) intended to make the [non-binding] additional protocol obligatory for all [member] states except the US and its allies, and also force Iran to suspend its nuclear [energy] activities,” he said.

However, he added, the delegates did not demand the suspension of Iran’s peaceful nuclear work, and, instead, obliged the Israeli regime to bring its nuclear activities under the supervision of the International Atomic Energy Agency.

As for his future activities, the Iranian president said he has long been thinking of establishing an international university that would admit both domestic and foreign students.

He further made it clear that he has no plans to form a political party, but added that it does not mean that he will not make any political comments, saying, “Political discussions are part of my life.”

Ahmadinejad underscored that he will spare no effort to serve the nation.

President Ahmadinejad’s second successive term in office ends next Saturday. He will be succeeded by President-elect Hassan Rohani, who achieved a landslide victory in Iran’s June 14th presidential election.