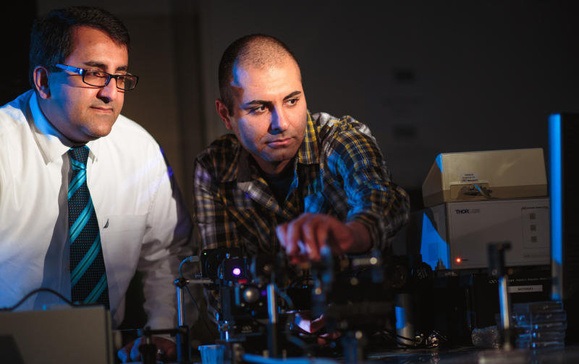 TEHRAN (ISNA)- An Iranian researcher Ali Tavassoli along with his colleagues at the University of Southampton has discovered a method which suffocates cancer cells, taking a wide stride towards cancer treatment.

A new discovery could help in developing new treatments for cancer. They have discovered a new molecule that stops cancer cells from reacting and surviving in low-oxygen conditions.

The molecule attacks HIF1 that tumors use to adapt to low oxygen levels. The team used a method called synthetic biology to find the molecule.

Dr. Ali Tavassoli, a Cancer Research UK scientist whose team discovered and developed the compound at the University of Southampton, said: “We’ve found a way to target the steps that cancer cells take to survive and we hope that our research will one day lead to effective drugs that can stop cancers adapting to a low oxygen environment, stopping their growth. The next step is to further develop this molecule to create an effective treatment.”

Dr. Julie Sharp, senior science information manager at Cancer Research UK, said, “Finding ways to disrupt the tools that cancer cells use to adapt and grow when starved of oxygen has been a hot topic in cancer research, but finding drugs that do this effectively has proved elusive. For the first time our scientists have found a way to block a master switch controlling cells response to low levels of oxygen – an important step towards creating drugs that could halt cancer in its tracks.”

The cancer cells require blood supply that gives them enough oxygen to survive. They grow quickly and as they grow, they surpass the oxygen and the nutrient supply. HIF-1 helps cancer cells cope in low oxygen condition; it acts as a master switch that turns on several genes, helping tumors survive, scienceworldreport wrote.

The researchers found the molecule that stopped HIF-1 from working by testing 3.2 million potential compounds, made by specially engineered bacteria.

The study was published in the Journal of the American Chemical Society.