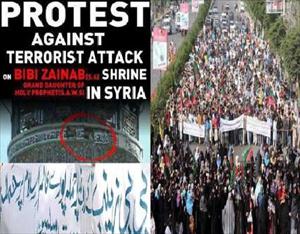 “We urge Syrian President Bashar al-Assad and United Nations to protect holy shrines in Syria. They are places where Allahˈs name is remembered and they should be protected,” Anjuman-E-Immia and Masjid-E-Askari General Secretary Amir Ali Badami told reporters after a protest rally condemning the attacks.

Badami said that the Free Syrian army is an ˈevil nexusˈ of the Americans, the Israelis and Al-Saud Family, ˈwhich is destroying the very fragment of humanity.ˈ

A protest rally was held by Shia Muslims against the attack on holy shrine of Bibi Zainab (AS) in Damascus. The rally which started from a Shia mosque in the city culminated at an open space half-a-kilometre away.

The speakers denounced the attack on holy sites in Syria and said a joint plan of action is necessary to protect the sites that are holy for all sects of Muslims.