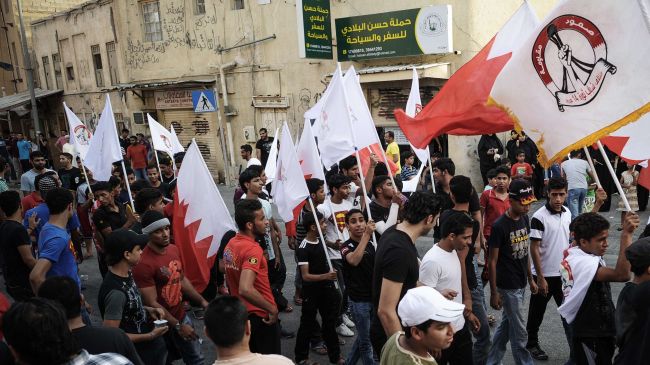 TEHRAN (FNA)- A senior Bahraini political activist underlined that the people of his country are determined to continue their anti-government protests until their rightful demands are met.

“The revolutionary people of Bahrain will continue their fight because the al-Khalifa regime has not presented suitable political solutions,” senior member of Bahrain’s National-Democratic Gathering for United Bahrain Mohammad al-Matou told the Arabic-language Al-Alam satellite TV channel on Sunday.

“The Manama regime instead of presenting a fair and proper  solution has resorted to force, suppression and imprisonment (of the opposition) …,” he added.

Al-Matou noted that the Al-Khalifa regime has received a green light from regional and international powers, including Saudi Arabia, the United Arab Emirates (UAE) and the US, for suppressing popular protests.

The Bahraini uprising began in mid-February 2011 as a domino effect of the Arab Spring which took place in Tunisia, Egypt and Libya.

The Bahraini government promptly launched a brutal crackdown on the peaceful protests and called in Saudi-led Arab forces from neighboring states.

Dozens of people have been killed in the crackdown, and the security forces have arrested hundreds, including doctors and nurses.

Bahrainis say they will continue holding demonstrations until their demand for the establishment of a democratically elected government is met.

Most human rights groups have criticized the Bahraini regime for violating international human rights codes in order to silence its opponents.