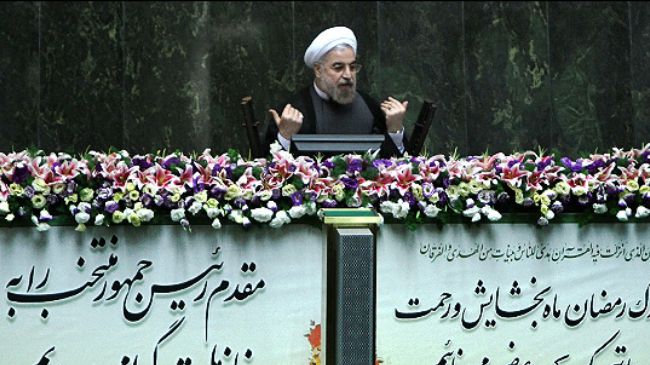 A senior Iranian lawmaker says the country’s President-elect Hassan Rohani is likely to introduce his cabinet during the swearing-in ceremony.

During his meeting with a group of Iranian lawmakers, Rohani said he would make every attempt to introduce his cabinet during his inauguration ceremony, Ramezan-Ali Sobhanifar said on Saturday.

The swearing-in ceremony of Rohani will be held on August 4, one day after his endorsement by Leader of the Islamic Revolution Ayatollah Seyyed Ali Khamenei.

The Iranian lawmaker added that issues regarding economy and international relations with Rohani were discussed during the meeting.

“In their meeting with the president-elect, lawmakers discussed their concerns and the country’s problems and issues and their [proposed] solutions to overcome these problems,” Sobhanifar said.

Earlier on Saturday, another Iranian parliamentarian Qader Marzi said 100 lawmakers had formed an alliance aimed at enhancing interaction between Majlis and Rohani’s administration.

Marzi added that the coalition has held meetings aimed at interacting with the president-elect regarding votes of confidence for the ministers of the next administration.