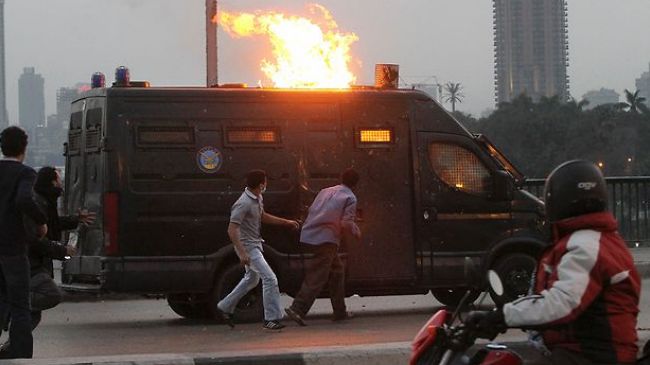 At least 120 people have been killed and over 1,500 others injured in clashes during rival demonstrations by the supporters and opponents of ousted President Mohamed Morsi across the country, Egyptian medical sources say.

The clashes broke out after Morsi’s supporters gathered in Cairo’s Nasr City district on Friday, demanding his reinstatement.

Mass rallies were held in response to Muslim Brotherhood’s call for a “peaceful stand” against the recent military “coup” that toppled Morsi. In a statement on Thursday, the movement’s leader, Mohamed Badie, asked Egyptians to come to the streets and demand freedom and legitimacy.

Meanwhile, the Egyptian army reportedly used live ammunition on demonstrators during the mass rallies, which swept Egypt to condemn Morsi’s overthrow by the army.

The Muslim Brotherhood said at least 31 people were killed early Saturday after security forces attacked the supporters of the ousted president in the capital, Cairo.

“They are not shooting to wound, they are shooting to kill,” the Brotherhood spokesman Gehad El-Haddad said, adding that the protesters had been hit by gunshot in the head and chest.

Egyptian interim Interior Minister Mohamed Ibrahim threatened that sit-in protests in the capital by the supporters of Morsi will be “brought to an end soon and in a legal manner.”

The country’s army chief, Abdel-Fattah al-Sisi, had also called for nationwide protests on Friday. Al-Sisi said in a speech that the nationwide rally will give the army a mandate to fight “violence and terrorism,” which have engulfed Egypt following the ouster of Morsi on July 3.

Earlier on Friday, Egyptian state media reported that Morsi is in detention while prosecutors investigate allegations that he “conspired” with the Palestinian resistance movement Hamas to carry out attacks and staging prison breaks during the 2011 revolution that toppled former dictator Hosni Mubarak.

However, El-Haddad denounced the accusations as “ridiculous,” saying they marked the return of the “old regime” of Mubarak.