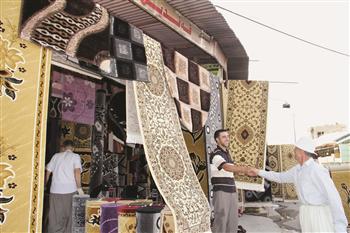 Iranian goods have emerged as powerful rivals to Turkish goods in the KRG market, as the devaluation of the sanctions-hit country’s currency lowers the price of its goods in the Kurdish market.

The trade rivalry between Iran and Turkey in northern Iraq is heating up, as the devaluation of the Iranian currency sent the price of Iranian goods down, increasing their allure in the Kurdish market.

“The trade volume between the Kurdish region and Iran is growing because of the devaluation of the Iranian currency against the Iraqi dinar and the U.S. dollar,” Import-Export General Director in the Kurdish Regional Government (KRG) Ministry of Trade, İsmail Muhammed, told Anadolu Agency.

As Iranian goods have become cheaper for Kurdish Iraqi buyers after devaluation, Muhammed said he estimated the bilateral trade volume between two parties, which is currently around 6,435 trillion Iraqi dinars ($5.5 billion), would double itself by the end of the year.

Such an increase would ramp up competition between Turkey and Iran, as the KRG market has also become a stage for Turkish goods and services, being an important spot for local manufacturers suffering from low domestic demand.

The number of Turkish companies operating in the KRG, which was around 485 in 2009, is around 1,500 today, has been boosted by close energy ties between the KRG and Turkey.

Iran’s Consul General in northern Iraqi city of Arbil, Seyed Azim Hossaini, said that currently 400 Iranian companies are operating in the KRG and everything will be done to increase this number. Commenting on the potential race between Turkey and Iran in the market, he said the competition was limited to “goods, not countries.”

“Sometimes, even different companies of same countries compete. This is normal,” he said. However, Eyyüp Smaky, an academic at Salahaddin University, claimed Iran was aiming to dominate the Kurdish market. “Iran wants to grow economically as it is in competition with regional players, particularly Turkey. Iran wants to have control over the Kurdish region, even the whole Iraqi market, in order to be able to have a say in the Kurdish region and Iraqi politics,” Smaky said. Iran’s annual exports to Iraq are around $413 billion, $55 million of which goes to the KRG, according to figures provided by Hossaini.

Home products, automotive parts, electronic devices, construction materials, textiles and food are among the products that people in the KRG buy from Iran. The economic relationship between the two Shiite-dominated countries became further intertwined when Baghdad signed a deal on July 22 with Iran to import natural gas for power generation. The gas will be shipped through a pipeline that will be completed in the next two months.

The oil deals will add a new dimension to two countries’ relationship, Hossaini said, adding that there were plans to establish a refinery in Iraq.