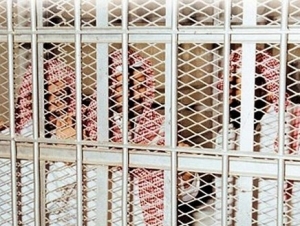 Continuation of arrests and protests in Saudi Arabia

SHAFAQNA (Shia International News Association) – More than 100 Islamist prisoners in Saudi Arabia have started their protests from the beginning of Ramadan and will continue it till Eid-ul-Fitr.

Al-Jazeera Al-Arabia newspaper reported the main aims of the protests are for organisations to find out about the prisoners conditions as well as for all to know that they are being prevented from meeting their families. Article 104 of the criminal law in Saudi states that temporary arrest is for 5 days but some of the prisoners are in jail for more than 6 months without any charges brought against them.

This is against Saudi and international laws. According to Citizens Movement (HASM) there are about 30 thousand political prisoners but Saudi Internal Ministry has officially declared only a fraction of them. HAMS was dissolved by Saudi authorities and the leaders were jailed for 4 to 15 years. One of the most famous prisoners is Sheikh Khaled Rashed who in 2005 was arrested for being accused of inviting for demonstration against publication of insulting caricatures of Prophet (PBUH) in Denmark. Sheikh Khaled was jailed for 15 years for asking a change of policy towards Denmark.