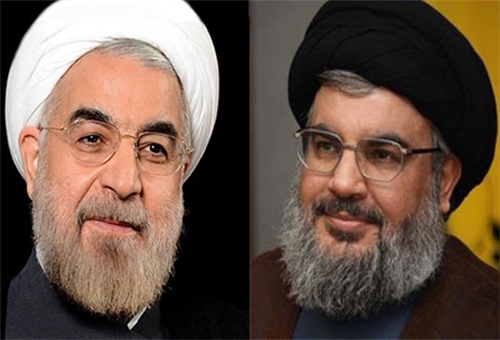 “No doubt, your tireless and dedicated efforts and those of Hezbollah warriors on the scene of resistance promise the decisive victory of the resistant Lebanese and Palestinian nations over the Zionist regime, which has always been supported by the Islamic Republic,”  Rouhani said, responding to a felicitation message of Hezbollah Secretary-General Hassan Nasrallah on his victory in Iran’s June 14 presidential election.

Rouhani’s message came as Hezbollah and Lebanon are celebrating the 7th anniversary of their victory over Israel in the 33-day war in Summer 2006, and also a few days after the EU listed the military wing of the Lebanese resistance movement as a terrorist organization.

The EU move has received wide condemnation in the Middle-East.

Yesterday, Tehran deplored the Union’s decision and reiterated its strong and everlasting support for anti-Zionist resistance movements in the region, particularly Hezbollah, which it said plays a pivotal role in the anti-Israeli axis.

Chairman of the Iranian Parliament’s National Security and Foreign Policy Commission Alaeddin Boroujerdi said on Tuesday that Hezbollah has a brilliant and honorable historical background in anti-Israeli resistance for the Muslim world.

Boroujerdi highlighted Hezbollah’s triumph over Israel in 2000 when the Zionist regime’s troops withdrew from Southern Lebanon.